D.A. Weirich Pulls a Petition, Gets Ready to Run 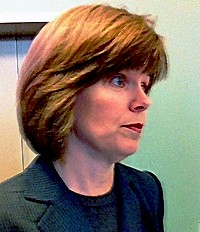 Believe it or not, the election season of 2012 is already under way, and one of the first candidates actively running is Amy Weirich, the longtime assistant District Attorney General who became D.A. in her own right when her former boss, longtime D.A. Bill Gibbons, was named state Safety and Homeland Security Commissioner earlier this year.

Weirich is running as a Republican, though she’s not exactly avid about the partisan aspects of her race. Her answer to a question about that after she picked up a filing petition at the downtown Election Commission office on Monday is worth quoting in its entirety:

“Of all of the elected positions in the county, it’s the one that’s the least partisan in terms of what we do and how we function and the way we work. We certainly do not pay attention to Republican Party agendas, Democratic Party agendas, or Tea Party agendas, We do what the people need. We do what the community asks. We are the voice of the community. Our job is to pursue the guilty and protect the innocent. We don’t honestly care what their political affiliation is or what their party affiliation is. But that [partisan elections] is the way it is in Shelby County, and so we’ve got to deal with it.”

That said, why is she running in the Republican primary rather than the Democratiuc primary? “Just lifelong. I’ve always been a Republican, and it’s the party I remember. But in terms of doing a job, it really doesn’t have much to do with the functioning of the DA’s office.”

So far no opponent has declared against Weirich, but, as Weirich notes: “The filing deadline is December 9, so who knows what will happen then? “

Many people regard her as almost a prohibitive favorite. Would she agree? ““I do. I’ve done a good job since January. I’ve been doing a good job for 20 years in this office, and I think I have what it takes to lead this community to the next level.”

As she notes, the early deadline for candidate filing — December 8, a day earlier than she mentioned, according to the Election Commission’s website — will soon be upon us. County primaries will follow on March 6 (the same day as Tennessee’s presidential primary), and the county general election will be held on August 2.

Given the depth of Weirich’s support in Republican ranks, it is unlikely she’ll draw a serious primary opponent (though spoilers are always possible), and the Democrats have not yet fixed on a candidate. Speculation earlier this year focused on former state legislator and city council member Carol Chumney and former judicial candidate Glen Wright.

The term which Weirich and any potential opponent would be seeking is the final two years of the eight-year term to which Gibbons was elected in 2006. The full eight-year term will be up again in 2014.