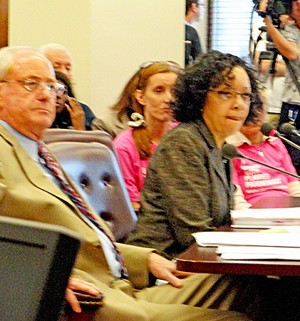 Saying “never say die" in a cause doesn’t mean that the cause you’re espousing won’t die. Veteran Democrat Lexie Carter and Shelby County Commissioner James Harvey may be in the process of finding that out this week.

Carter has held several positions in the Shelby County Democratic Party and is a co-host (with Flyer contributor Cheri DelBrocco) of “Eyes on Memphis,” a Wednesday morning show on radio 990, KWAM-AM, that often serves as a pulpit for Democratic Party positions.

Harvey, who recently ran for city mayor, is a Democratic commissioner of conspicuous unpredictability and changeable attitudes. From time to time he takes firm and even courageous positions and stands by them in the face of pressure, but more often he talks himself in and out of opinions for and against a given issue, and more than once he has begun a speech with a determination to do one thing and ended with a pledge to do its precise opposite.

Last week after the Commission voted 9-4 to approve a family-planning contract with Christ Community Health Services to administer a $397,000 federal grant to provide Title X family-planning services, Carter’s partisan zeal and Harvey’s penchant for reversing himself created an opportunity to reconsider that Commission vote. To do so would give Planned Parenthood, the traditional Title X agency locally, another chance to bid for the contract.

Carter talked Harvey, one of three Democrats to vote for the CCHS contract, into using his position as someone on the prevailing side of that vote to call for a reconsideration at the Commission’s next meeting on Monday, October 31. Parliamentary procedure mandates that only someone who had previously been with the majority on a completed vote can seek such a formal reconsideration.

Three Democrats — Harvey, Steve Mulroy, and Justin Ford — had joined the Commission’s six Republicans to approve the CCHS contract. Each did so in a context of some ambivalence. Mulroy and Ford had voted the other way in a preliminary vote the previous Wednesday in committee, while Harvey had abstained.

Ford has not stated publicly his reasons for changing his vote. Mulroy had agonized over the matter and voted for the CCHS contract last week only after obtaining spoken assurances from county CAO Harvey Kennedy that Christ Community Health Services would be held to strict compliance with the terms of the county’s RFP (request for proposal) on Title X.

Strict compliance, in that context, meant, for example, that CCHS would faithfully provide third-party referrals to patients seeking emergency contraception (e.g., via the “morning after” pill), though the agency would not perform such measures on its own premises. It also meant that CCHS would include abortion in the alternatives it described to patients, though; again, no such procedure would be performed at any of the CCHS centers (seven, including one mobile unit).

Abortion itself is not directly covered by Title X funding, though Planned Parenthood’s historical inclusion of abortion among the services it provides patients at large has been the sticking point for the social conservatives who loom large in the state GOP establishment. Only a technical flaw in a General Assembly measure last spring kept Planned Parenthood from being proscribed from Title X funding altogether.

After a conversation with Carter in the wake of last week’s vote endorsing the CCHS contract, Harvey, who had said, “I just thought I would give Christ Community the benefit of the doubt,” made his decision to reverse that position and, as a member of the prevailing side, to call for a re-vote. He also requested that Shelby County Mayor Mark Luttrell hold off on any formal action approving the contract.

Mulroy kept his options open and in the meantime had asked for a conference with Kennedy and county Health Department director Yvonne Madlock to explore again the nature of the county’s reassurances on the matter of CCHS’s strict compliance with the county’s RFP.

It was while Mulroy was having that conversation on Monday of this week that he was told Shelby County Mayor Mark Luttrell had already signed the Commission’s resolution of last week extending the Title X contract to CCHS. He was also told that Luttrell would also be signing the contract itself in short order.

That is where matters stood on Tuesday morning, with the prospect of overturning last week’s Commission vote and forestalling the CCHS contract looking remote to the point of being moot.