Arlington's Avery Hopes to Keep City and County Schools Together 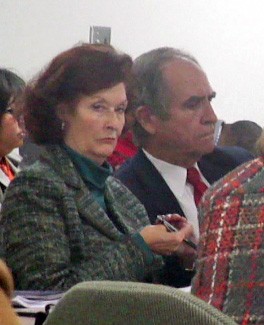 How is the planning going on the school-merger Planning Commission? Very well, according to one key member.

Joyce Avery, a Republican who logged two terms on the Shelby County Commission as a District 4 (suburban) representative, earned a reputation on that body as a bridge between city and county interests. This was especially so during her last year, 2009-10, when she served as both chairman and interim mayor and focused considerable effort on shoring up medical facilities for the indigent.

Avery may be functioning as a go-between again in a new role as a member of the Planning Commission, created by the Norris-Todd bill earlier this year as an official guiding force for the ongoing city/county school merger.

An appointee of state House Speaker Beth Harwell, Avery professes herself determined to see that the consolidation of Memphis City Schools and Shelby County Schools proceeds smoothly and completely, without a new special school district forming in 2013, as the Norris-Todd bill permits, in the area outside the Memphis city limits.

“I think we can maintain a single, successful district, with everybody in it, and I’ll do what I can to make it happen,’ Avery said after a meeting of the Planning Commission Thursday night at the county’s Code Enforcement building on its Shelby Farms campus.

Avery said that she thought unity could be preserved without recourse to a much-discussed "chancery" model, which would involve several discrete and virtually autonomous sub-districts within a common system.

This week’s meeting, featuring a presentation by SCS superintendent John Aitken and members of his staff, counter-pointed one held last week under the auspices of MCS superintendent Kriner Cash and his associates. “They both did very well,” said Avery, who commended a “sad” Cash for persevering despite the recent loss of his wife to cancer.

Avery, a resident of Arlington, said she was aware that several members of both the new interim all-county school board and the Planning Commission itself had begun by harboring notions of creating one or more special districts when merger is completed in 2013.

“But I think they’re going to change their minds. This is a wonderful commission, and we are beginning to cohere and come together as we work alongside each other. I expect us to want to stay together when all is said and done. I think we will. I really do."

For that to happen, Avery has some missionary work to do right under her nose. The City of Arlington, like several other suburban municipalities, has already commissioned a study of potential special school-district status. Reminded of that, she shrugs. "You know me. I'm determined."