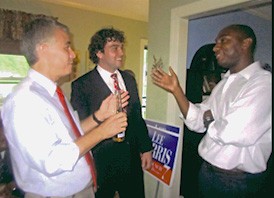 Sometime tonight the residents of City Council District 7, which encompasses a wide swath of downtown, North Memphis, and Mud Island, will have elected a new Council member to succeed former longtime Councilwoman Barbara Swearengen Ware, who resigned — or, in the idiom of the day for those pressured out of office, retired — as part of the settlement of her indictment for official misconduct.

In the meantime, Berlin Boyd has by general agreement of his Council mates served creditably and well as an interim replacement for Ware, who had been charged with offering modest inducements to employees of the County Clerk’s office for the privilege of bypassing automobile registration procedures.

But Ware’s permanent successor will be one of the two survivors from the large original field who contended in the regular election that ended on October 6.

Contending in the runoff election which concludes on Thursday are University of Memphis law professor Lee Harris and Kemba Ford, the daughter of former state Senator John Ford who broke off a would-be acting career and returned to Memphis from California in the wake of her father’s own legal problems. The senior Ford now languishes in a federal prison in Mississippi after conviction on bribery charges relating to the Tennessee Waltz scandal.

Many, perhaps most, observers, see the two contenders running neck-and-neck.

Though their supporters were not necessarily as circumspect, the runoff candidates themselves expressed appreciation and support for each other. In the campaign’s waning days, Harris said at a public forum, “I think we both care,” and Ford was even more complimentary about Harris: "He's a fine person. He'd be a credit to any community he offered his services to."

Even so, there was a subtext of fundamental differences between the two campaigns — Ford casting herself as a grass-roots representative of the people, and Harris owning visible support from established business and political figures, including Mayor A C Wharton.

Far from dodging the legacy of her father or her extended family clan, Ford pitched them both as positives. “My family’s legacy is never absent from my mind. I have learned how much our family has affected people’s lives. Our family’s legacy in this city has been a huge inspiration. A lot is expected of me.”

And, for all his high-profile support, Harris stressed his own native roots and modest origins. “I’m a workhorse, not a show horse. I am Memphis- born and raised here. My Dad was an air-conditioner repairman, and my Mom is a retired high-school guidance counselor….I love this community, and have been blessed by this community.”

Ford boasted endorsements from several public-employee unions aggrieved by recent budgetary cuts in their pay and benefits. “We are racing to the bottom in employment wages and defined benefits. I stand for hard working people and against privatization,” she said.

Harris pointed out that he was a member of United Campus Workers, a union composed of faculty members and University employees. He also enjoyed the support of the Memphis Education Association.
Both candidates made strong statements in support of boosting education.

Both were relentless campaigners, going door-to-door, making frequent public appearances, and availing themselves of mailers, robocalls, and other established electioneering techniques. 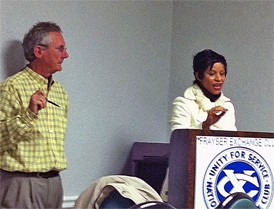