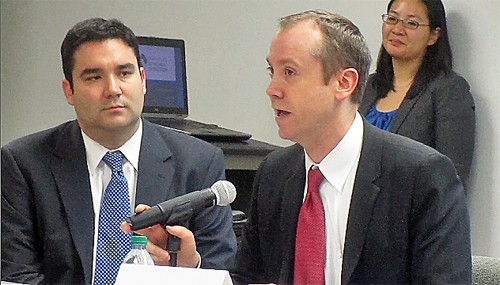 One catch: Implicit in the elaborate models discussed — if largely unspoken — was the significant role to be played by charter schools, which the Haslam administration has made a major commitment to. And only two nights earlier the county’s interim 23-member unified school board poured a few more shovelfuls of dirt on the concept of new charter schools, applications for which the board had roundly defeated and buried in its two previous meetings.

At those prior meetings, 17 charter-school applications, including several by former Memphis City Schools superintendent and Memphis Mayor Willie Herenton, had been turned down and then rejected again when resubmitted in greater detail.

The major reason for the rejections had been given as concern about the additional expense entailed by new charter schools, but at the Tuesday night meeting this week, the board heard from several ideological opponents of charter schools per se, a number of whom expressed concern about dilution of regular public school education, in the process citing such anti-charter school theorists as Diane Ravitch of New York University. (John Branston has more on "escape hatches" from traditional public education.)

According to Jane Roberts in The Commercial Appeal, Huffman had used the expression "bad policy" earlier Thursday in a meeting with the CA's editorial board to describe the developing resistance to charter schools on the part of the interim school board.

In any event, charter schools as such were downplayed at Thursday night's Planning Commission meeting. Most of the presentation, especially on Huffman's part, was focused on several modes by which the administration proposes to raise the level of existing low-performing schools, putting the bottom-most under ASD (Achievement School District) control and guiding the next level up into "district-level innovative zones."

Unsurprisingly, Memphis provides a largish proportion of the state's ASD-eligible schools. — 25 out of the current 34 so designated statewide. Huffman may have whetted the appetite of Planning Commission members (and those interim School Board members who were present) with his mention of $40 million in funding which the state would make available for the ASD effort in March, to be followed by another $40 million next fall.