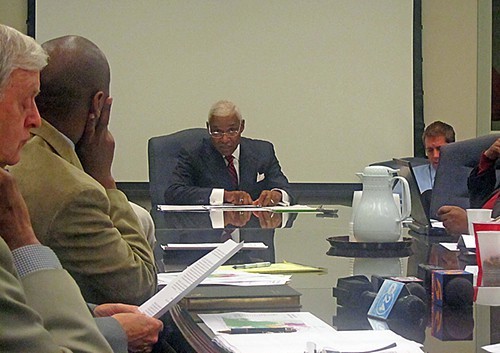 The members of the Memphis City Council’s committee on “personnel, intergovernmental, and annexation” met in the Council’s 5th floor committee room at City Hall Monday afternoon and did what the full Council did roughly a year ago — vote unanimously to oppose an aggressive move from Nashville against its sovereign interests.

In 2011, the issue was whether an action by state government could nullify or impede the efforts by the Memphis City Schools board to surrender the MCS charter, an action which required ratification by the council. On Monday afternoon the catalyst was newly proposed legislation that would abrogate a Memorandum of Understanding between Memphis and other Shelby County governments regarding their respective annexation spheres.

In both cases, Mayor A C Wharton joined the council in stating resolute opposition to the intrusions of state government, actual or potential.

Wharton began by saying that two bills proposed by the tandem of state senator Mark Norris and state representative Curry Todd — one that would require a referendum of any population about to be annexed; another removing the Gray ‘s Creek area from Mem phis’s annexation reserve — constituted “a matter no less serious than the future and the right of the City of Memphis to grow.”

The bills had been introduced “without even the courtesy of conversation with the bull sponsors and without regard to the standing annexation agreement signed by all Shelby County mayors in 1998,” Wharton said.

The mayor said the agreement, which was made in the aftermath of the “Toy Town” controversy of 1998, “was grounded in the recognition by all that the future growth and economic well-being of each community was benefited more from an agreement which allowed and afforded each an orderly, predictable, and acceptable opportunity to grow by annexation.”

Following the mayor’s remarks, Councilman Jim Strickland formally moved that the committee approve on first reading a resolution to annex the Gray’s Creek area. Before a vote was taken, Council c conversation revolved around two themes — (1) whether annexation was a judicious move in itself ; and (2) whet her a vote for the resolution was necessary to safeguard the city’s rights vis-à-vis Nashville.

The bringer of the motion, Strickland, was among those who was concerned about the efficacy of annexation (not only of Gray’s Creek but in general). So was Shea Flinn, who expressed what he saw as the need for “sober analysis” of the issue .

The newest Council member, Lee Harris, put the issue bluntly: “How fast can Nashville move? Can we move faster?”
Council attorney Allan Wade opined that “they could probably go faster,” and Wharton acknowledged that “There’s no way to outrun Nashville. They can undo what we do.”

The meeting, though conducted in a crisis atmosphere, was not without comic relief. During a brief discussion on the matter of whether recently annexed communities had received all the benefits which they been promised, Wharton said there were very few unresolved promises and, referencing one pending matter, told Chairman Collins, as if by an afterthought, “You’re getting Zodiac Park.”

A second bit of humor greeted Council Bill Boyd’s question as to whether the Council could de-annex the area if Nashville backed down. Attorney Wade said it could.

Collins and Commissioner Myron Lowery made strong arguments for action which, as the committee chairman put it, would put “the maker of the bills” (presumably Norris, with whom he had spoken) that “the city would protect its interests. Lowery raised the issue of “racism” as something to be considered regarding the proposed bills.

After all was said and done, the committee members, including those who had raised potential objections, voted to approve the annexation resolution on first reading. A second reading will be held at the Council meeting of February 7, and there was some talk about scheduling a second reading for the next day.

At the mayor’s suggestion, the members present took a second vote that, as Wharton put it, “everybody agrees that the Council objects to both bills.” This, too, was approved unanimously.