Shelby County's mayor has proved to be even-handed on school consolidation but protective of county interests. 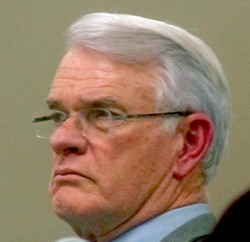 Anyone attempting to locate Shelby County Mayor Mark Luttrell on the political spectrum might soon think himself lost on a road map reflecting back-and-forth meandering, abrupt directional switches, and confusion as to an ultimate destination point.

The key word here is “might.” Actually, there is an admirable consistency to Luttrell’s sense of mission and Gestalt. He is a centrist who, while he found himself cast as the Shelby County Republican Party’s ticket leader during the county election cycle of 2010 (and was vital to the GOP’s striking success that year), never made any secret of the fact that he deplores partisanship in local government.

Over and over he has made it clear that if he had his way, elections for county offices would revert to the non-partisan mode that governed them until the early ‘90s when first the Republicans and then the Democrats took to holding local primaries for these jobs.

Note: I’m already anticipating comments/rejoinders from Democratic activists pointing out that Luttrell was on a platform with such-and-such a Big-Time Republican at such-and-such a time and place and endorsed So-and-So against a Democratic opponent backaways.

To which I say: So What? Such pro forma appearances and declarations are the dues that any politician pays for participation in a party-oriented system which, so long as it exists, makes it prohibitively difficult for acknowledged independents to win. It is a matter of record, however, that Luttrell has lately encountered more resistance to his proposals (e.g., on the consolidation of county government’s IT programs) from the County Commission’s Republicans than from its Democrats.

This is no endorsement. There have certainly been Luttrell policies, both as mayor and as sheriff, that can be contested on ideological and other grounds. But his conduct during the various battles over school consolidation over the past year and a half has clearly been that of an official seeking a solution amenable to all sides. As well as one determined, like Luttrell’s Memphis mayoral counterpart, A C Wharton, to maintain local prerogatives.

Luttrell, who attempted to broker a compromise during the earliest moments of the consolidation crisis in late 2010, has been a member for the past several months of the post-Norris-Todd Transition Planning Commission. As such, he has served as something of a mediator.

The county mayor has made it clear that he accepts the realities of Norris-Todd, including that Act’s escape clause permitting the suburban municipalities, as of August 2013, to form their own school districts, to be distinct from that of a merged city/county system. But, when state Representative Curry Todd (R-Collierville) introduced a bill last month that, in effect, would have handed off existing county school structures to those districts, still not formed, Luttrell stated his opposition.

“I don’t think the state ought to be dictating to Shelby County how we dispose of our property,” he told the assembled members of the Shelby County legislative delegation in Nashville. “That needs to be a decision that’s made at the local level between the school board and the municipalities.” And he added that, before such Rubicons should be crossed, the TPC should be allowed to finish its work.

It was also Luttrell, however, who successfully urged the TPC to hear out the suburban mayors on their future educational plans — which the Planning Commission will do at its regularly scheduled Thursday meeting this very week.

That session is qualified in two important ways that casual observers might have missed. As TPC chair Barbara Prescott pointed out at last week’s meeting, it is incumbent upon the mayors to raise questions of the Commission, not vice versa. And it is they who will be heard from, not, as TPC member and ex-Shelby County Schools board chairman David Pickler had suggested, the professional consultants advising the mayors on their proposed school systems.

When County Commissioner Walter Bailey proposed a resolution, week before last, containing the terms of compensation which should accrue to any transfer of school properties from the Uniform School Board to the proposed suburban school districts, Luttrell objected to the measure as hasty and ill-advised — a factor in the ultimate tie vote that stymied the resolution.

The mayor’s main objection was that the resolution would tend to close off discussion between the various principals to the dispute — city, county, and state. When the resolution was recast last week, yielding negotiation over such matters to Luttrell himself on behalf of the County Commission and the Uniform School Board, it passed.

The mayor made a point of stressing, “We do need to protect our interests,” and assured Bailey, “My passion rivals yours in protecting the assets of this community. While eschewing any “fear of Nashville” per se, Luttrell said, “I do believe Nashville should stay out of our business.”

Further confirmation that the county mayor, while serving as an honest broker, intended to maintain the interests of the whole county (70 percent of whose residents live within Memphis city limits) came from the fact that he floated some doubt regarding the legal liabilities of county government to provide financial support to any new municipal school districts.

And he specifically cautioned the residents of the suburbs, who scheduled to vote in May referenda regarding creation of such districts, “…I would hope that the municipal districts would do their due diligence and make sure that they have answers to some of those questions before they take this to a referendum…. We know there will be state and federal funding, but to what extent there will be county funding is just not clear at this moment. We just don’t know.”