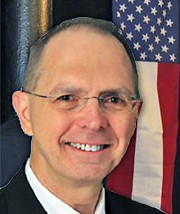 George Flinn, the Memphis radiologist/radio magnate who has increasingly turned to politics in recent years, will very likely do so again, sources tell the Flyer. This time Republican Flinn, who served six years on the Shelby County Commission and made races for County Mayor in 2002 and for the 8th District Congressional seat in 2010, apparently is aiming at Congress once more.

Only now it’s the 9th District seat, the one currently held by Democrat Steve Cohen. There’s already a Republican running — Charlotte Bergman, making her second consecutive try — but she’s on a shoestring budget, and Flinn, who is independently wealthy and spent more than $3 million in his 2010 race, would clearly be able to match war chests with Cohen, who is said to have close to $1 million on hand himself.

Flinn, who formerly lived in the River Oaks section of East Memphis, is now firmly within the confines of the 9th District, which has been redistricted to include sections of North Shelby County and Cordova that his backers believe are Republican-friendly.

The 9th District, however, is still majority-black, and is considered the most reliably Democratic of Tennessee’s nine congressional areas.

In entering a 9th District race, Flinn would find himself in the familiar position of facing long odds. Though he was able to defeat former state Rep. Larry Scroggs in the 2002 GOP primary, he was clearly an underdog against A.C. Wharton in the general election for County Mayor. And, when Flinn began his 2010 congressional race, eventual winner Stephen Fincher of rural Frog Jump had been campaigning hard for at least a year in the 8th District and had sewed up much Republican Party support.

Cohen would be another formidable foe — having dispatched his last several opponents, both Democratic and Republican, by lopsided ratios.

More details to come in next week’s Flyer.