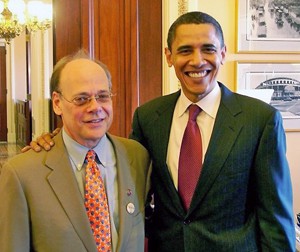 Shortly before the filing deadline of 12 noon Thursday for state and federal offices this year, 9th District congressman Steve Cohen, already considered far ahead of potential rivals in his Democratic primary race, both in campaign finances and in voter support, delivered what might be the coup de grace.

Cohen’s campaign announced that President Obama, on the very eve of the race, had endorsed the congressman for reelection in the August 2 Democratic primary and beyond. In a statement released by the congressman’s campaign staff, the President was unequivocal in his support: “Congressman Steve Cohen has worked with me on jobs bills, health care, and other issues of importance to the middle class. He also never fails to pitch me on the city of Memphis, whether it's Booker T. Washington High School, Memphis basketball, or barbeque. I urge you to vote for Steve Cohen, a tireless advocate for the 9th District.”

In turn, Cohen released a statement of his own: “I appreciate President Obama’s continued faith in me. It has been my privilege to work with the President, a man of integrity, honor and vision as well as a great leader, as I represent the 9th Congressional District of Tennessee. The President has always shown genuine concern and care for Memphians and I know that together we’ll continue to make good progress.”

Other 9th District congressional candidates who had filed by the deadline were, among Democrats, Tomeka Hart and Palmer Harris. The latter is a political unknown, but Hart, head of the Memphis Urban League chapter and a member of the Unified Shelby County School Board who played a major role in effecting school merger, is well- known and regarded highly enough to have nursed hopes of making an effective challenge.

Even before Thursday’s bombshell announcement by Cohen, however, Hart had experienced major difficulty drumming up money and support.

Republican candidates who filed in the 9th were Charlotte Bergmann, George Flinn, Ernest Lunati, and Rollin Stooksberry. Bergmann was the GOP nominee two years ago in a losing general election race against Cohen, and was considered a likely nominee this year as well before the decision to run by Flinn, a wealthy physician and radio executive who formerly served on the Shelby County Commission and is well known and influential in party circles.

Independent Brian Saulsberry will also be a candidate, against the Democratic and Republicans winner, in the November general election.

OTHER FILINGS (note: several listed here were still underdoing the process of having their petitions evaluated for the right number of valid signatures at press time; any changes in the roster who will be made in this space later, as needed):

Filees in legislative races include:

The race will likely be decided in the Democratic primary, where incumbent Marrero has stiff competition from Kyle, the Democrats’ leader in the state Senate who was gerrymandered out of his erstwhile District 28 before managing a late shift in the heavily Democratic District 30.

State House District 90: Incumbent Democrat John DeBerry is opposed in his primary by Jeanne Richardson, who is the current incumbent in District 89, and by Ian Randolph, whose qualifying signatures were still under examination. Though she is considered an underdog, Richardson, who was effectively gerrymandered out of her former district, will have support from District 90 liberals disenchanted with some of DeBerry’s positions.

District 6: Jonathan Lewis and Reginald Porter Jr., with Lewis’ signature being looked at.