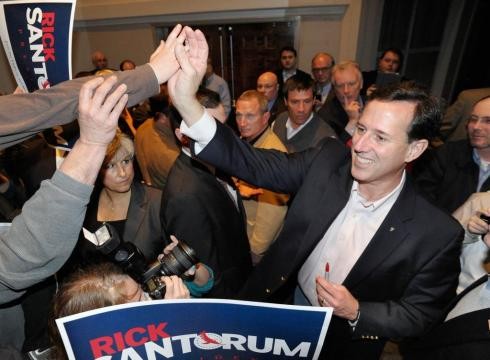 On the very cusp of GOP presidenrial candidate Rick Santorum' suspension of active campaiging on Tuesday, Tennessee supporters of the ex-Pennsylvania senator, who won the state’s preferential primary in March,expressed themselves as aggrieved at the way the Republican state executive committee had filled out a slate of Santorum convention delegates.

The committee had the duty since no would-be Santorum delegates as such had managed to get themselves on the Super Tuesday ballot in time.

Though acknowledging that several bona fide Santorum supporters were named as delegates to this summer’s Republican convention, Kay White of Johnson City, a Tea Party activist who served as a Santorum campaign organizer complained that she and other supporters of the former Pennsylvania senator had been relegated to alternates’ positions or overlooked entirely, while some of the delegate spots meted out to Santorum in proportion to his state primary totals were allegedly given to people of suspect loyalty.

In a statement to her network and to state GOP chairman Chris Devaney, White said, “I believe that each of these people…should give a written personal endorsement and have a sign in their lawn to announce to all of their neighbors who they are now supporting.”

The issue would appear to be poor fodder for further controversy, inasmuch as Santorum's suspension of campaigning in effect is a concession of the GOP presidential race to former Massachussets governor Mitt Romney, long the Republican frontrunner and now the party's presumptive nominee.