As amended by nervous committee Republicans, the bill is now limited to Shelby County, a fact putting it in legal jeopardy. 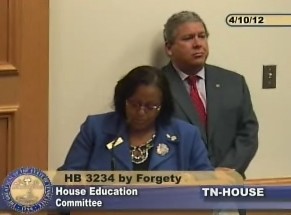 As the state House Education Committee convened Tuesday for its latest go-round on a bill by state Senator Mark Norris to facilitate suburban municipal school districts, it was becoming clear that resistance from elsewhere in Tennessee and in state government, as much as from Shelby County itself, might stand in the way of that bill and a related measure by Norris (R-Collierville), the Senate majority leader.

As several mayors from potentially affected Shelby County suburbs sat waiting, consideration of HB3234, the House version of Norris’ SB2098, which would advance the date of eligibility of new municipal school districts, was delayed by prolonged debate of another bill, HB2235.

That bill, by Rep. Glen Casada (R-Franklin) would in effect nullify a measure passed last year allowing advanced high school students to test their way into college. Originally designating only Williamson County, the bill had bieen modified to include all of Tennessee, clearly for concerns of constitutionality. But the change drew opposition from several members, across party lines, and its ultimate future appeared problematic.

And the identical distinction, between local and statewide application, stood in the way of final passage of HB3234, concerning which not only Democrats Lois DeBerry (D-Memphis), former Speaker Jimmy Naifeh (D-Covington), and Democratic caucus chair Craig Fitzhugh (D-Ripley) had expressed reservations, but also Rep. Bill Dunn of Knoxville and other Republicans, publicly dubious about opening the door to new municipal school districts in their areas.

HB 3234 was written to apply statewide, but Rep. Dunn and Rep. Harry Brooks, also of Knoxville, both offered amendments to the bill Tuesday that would make the bill apply only to Shelby County — creating the same potential legal vulnerability that Norris had been at pains to avoid.

The point is key, and that defensive move by the two Knoxvillians presented sponsor Norris with the same dilemma that confronted him earlier in the session with two ill-fated measures regarding annexation rights in Shelby County — both co-sponsored by state Rep. Curry Todd (R-Collierville), his partner in last year’s Norris-Todd bill.

Even as he had presented those bills, Norris had nursed public doubts as to their constitutionality. The bills curtailed the annexation rights of the City of Memphis while aggrandizing those of the suburban communities. For such measures to be limited to Shelby County required a universal consent of Shelby County legislators, city and county, which the bills clearly did not have. As Norris had feared, state Attorney General Robert Cooper would opine that the bills were unconstitutional, and they were withdrawn.

It was to avoid a similar fate for HB3234 that Norris had not only jumped up the point of eligibility for new municipal school districts from the August 2013 date prescribed by Norris-Todd but made the bill apply statewide. But doing so invited the kind of genuine reservations that had been spoken to by Rep. Dunn and others in previous considerations of the bill. In simple terms, the bill was legally vulnerable if confined in its application to Shelby County; it was politically vulnerable is applied statewide

The point was rubbed in by Shelby County Unified School Board member Martavius Jones, who with colleague Patrice Robinson, was in Nashville to address the committee. Contending that, even as amended to limit its application to Shelby County, Norris’ bill would eventually affect all of Tennessee, Jones cited the example of Pennsylvania, which has lax laws regarding the creation of new school districts and has as many as 43 different districts in a single county.

“We don’t want Tennessee to be another Pennsylvania,” Jones said.

Both committee chairman Richard Montgomery (R, Sevierville) and education consultant Chuck Cagle, the latter upon request and without taking sides, commented on potential difficulties in allocating governmental funds in the event of new municipal districts. 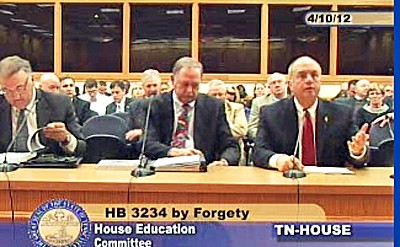 Also addressing the committee, on behalf of the bill, were Bartlett Mayor Keith McDonald and Jim Mitchell and Tim Fite, the heads of Southern Educational Strategies, consultants to the suburbs.

Rep. Dunn wondered aloud about alternatives to municipal districts as such: “Is there not a better way to do this?” McDonald replied that chancellor models, which allow for diversification short of independent districts, “have not been very successful.” Jones then mentioned the “Multiple Achievement Paths” model recommended by the Transition Planning Commission.

McDonald suggested that “cooperation” between clearly separate districts was to be preferred — to which Dunn cracked that “from what we hear,” not much cooperation occurred in Shelby County. Even so, he suggested, “Why don’t y’all just come up with cooperative agreements rather than all this other stuff?”

In the end, amid much hemming and hawing and without apparent enthusiasm, the committee would pass forward the bill — bearing the crucial amendment limiting its application to Shelby county — to the House Finance, Ways, and Means committee, where it will get more vetting before it reaches the House floor, possibly next week.

Meanwhile, another Norris initiative was due for a test on Wednesday, when HB1105, a Montgomery –sponsored bill requiring school board evaluations of school directors, was scheduled to come before the House bearing two amendments tacked on in the Senate by Norris.

The amendments are intended to override Attorney General Cooper’s recent bombshell opinion — that the Shelby County suburbs could not proceed with referenda of their populations concerning municipal schools districts nor with the creation of school boards until the August 2013 date specified by Norris-Todd.

Montgomery has been quoted as saying he did not want such amendments on his bill, but it remains to be seen whether he gets them, or whether the same sort of flak is aimed at his bill, if so amended, that has attended the slow and uncertain journey of HB3234.