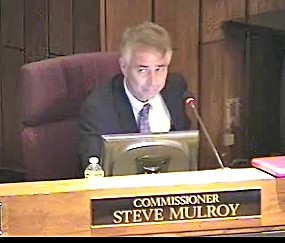 After a brief regular meeting that had been notable only for Commissioner Henri Brooks’ quibble about whether protocol had been followed in a committee meeting last Wednesday, Commissioner Steve Mulroy unloosed a bombshell resolution that would put the Shelby County Commission on record, 8-5, as opposing any new legislative tinkering in Nashville affecting the ungoing Shelby County school-merger process.

A similar resolution, moved by Transition Planning Commission member Jim Boyd, had narrowly failed of passage at last Thursday’s meeting of the TPC.

Mulroy’s resolution addressed two bills recently introduced by state Senator Mark Norris (R-Collierville) that would facilitate the holding of suburban referenda on behalf of municipal school districts.. The bills were regarded as responses to an opinion by state Attorney Genral Robert Cooper that five Shelby County suburbs could not take immediate concrete steps toward creating such districts.

Noting that the legislature is nearing the end of its session and that its actions are fast-moving and flexible, Mulroy amended his resolution to add the phrase “or any bill speeding up the process for municipal school districts to form.” He cited the existence of last year’s Norris-Todd bill, whose provisions regulating the school- merger process had received the approval of presiding U.S. District Judge Hardy Mays.

“The process we have in place is adequate and we don’t need further interference by Nashville,” Mulroy said.

Several commissioners representing suburban constituencies spoke against the resolution. Said Terry Roland: “This is kind of hypocritical here. The first thing they do is go get an Attorney General’s opinion to tell us we can’t do this….If you want that [legislation on behalf of municipal districts] to pass quicker, pass this, because the state legislature don’t give a flip about what this Commission thinks…”

Commissioner Chris Thomas said, “It seems like those who don’t want municipal schools are doing everything they can to stop municipal schools.” He said that Attorney General Cooper’s finding had been “just an opinion.”

Commissioner Wyatt Bunker defined the issue as one of “qualify education, contending, “Our municipalities are convinced that the only way to insure quality eeducation is if they control the education of their children.” He said it was necessary for the legislature to speed the process up to insure proper parental preparation for the next school year.”

And he seconded Roland on the effectr of the resolution, encouraging “all the Democrats” to vote for the resolution on the grounds that such an action would put “wind in the sails” of pending legislation on behalf of municipal schools.

But another Republican, Commissioner Mike Ritz, a proponent of the resolution, spoke at some length about calculations he had made indicating that the municipalities which had expressed a wish to hold referenda and to form municipal districts could be overwhelmed with unexpected expenses and that it would be better for them to permit the TPC’s advisory process to conclude before acting.

Commissioner Walter Bailey said the rush to create municpal schools was based on "hysteria and unfounded fears" and that he was prepared to defer to the strong opposition to such bills by state Rep. Jimmy Naifeh (D-Covington).

After the vote Mulroy asked for the immediate transmission of the resolution’s text to Nashville and pressed Harvey Kennedy, CAO for Shelby County Mark Luttrell, for assurances that county lobbyists in Nashville would inform legislators. Kennedy indicated he couldn’t say without consul ting with Luttrell and noted that the mayor had not taken a position opposing municipal schools.

Mulroy insisted on the “courtesy” of the legislators’ conveying the fact of the resolution and, after pointing out that the Commission voted to fund the lobbyists, suggested that if such an action were not taken, “we should have our own lobbyists or no lobbyists at all.”

Bunker made a point of insisting that the party labels of those voting for the resolution be included with the text being sent to Nashville. Mulroy said he had no objection to that. Of the 8 Aye votes, 7 came from Democrats, and one – Ritz’s – was by a Republican. All the Nay votes were from Republicans – Roland, Bunker, Thomas, Brent Taylor, and Heidi Shafer.

Monday ‘s vote came as a surprise add-on. Proponents of such a resolution had been ready to hold a vote at the Commission meeting of two weeks ago but held back when two Democratic members expected to vote Aye failed to attend. On Monday, all Democrats and Ritz were on board.

Roland attempted to object to the add-on but was overruled by Commission chairman Sidney Chism.

The Commission majority’s action, the first of its kind, came in the wake, not only of last week’s aborted action by the TPC but of an earlier decision by the Unified School Board of Shelby County not to approve a strong resolution on the need for compensating the county for any school buildings transferred to municipal school districts. The Board’s vote had been by a narrow margin.

Text of the Commission Resolution:

WHEREAS, for several decades, the General Assembly has seen fit to ban the creation of new special school districts; and

WHEREAS, this ban was motivated in part by past experience with a proliferation of special and municipal school districts, which divided communities, reduced economies of scale and efficiencies, and led to inequalities in educational opportunities; and

WHEREAS, current law places the foundational obligation of public education at the county level; and

WHEREAS, the General Assembly disturbed this equilibrium last year in the “Norris-Todd” bill, which lifted the ban on municipal school districts in Shelby County effective upon the successful completion of the ongoing school merger process in Shelby County; and

WHEREAS, SB2908 has passed, and HB3234 is currently pending, in the General Assembly, which would lift the current ban on municipal school districts effective Jan. 1 of 2013; and

WHEREAS, it is obvious that this new legislation is directed at Shelby County, and is being rushed through the General Assembly to address concerns raised by certain individuals in Shelby County who may not represent the majority of Shelby County citizens; and

WHEREAS, it is desirable for Shelby County to have some latitude, some leeway, a decent interval of time, to plan and implement school merger before further intervention from afar in Nashville; and

WHEREAS, it is desirable that the ongoing work of the Transition Planning Commission and the Unified School Board in designing and implementing the new unified school system have a minimal chance to run its course before the decision is made whether to re-fragment the Shelby County school into multiple school districts; and

WHEREAS, it is desirable that all actors in Shelby County understand exactly what sort of unified school system we will have before important and irrevocable decisions are made to split the county education system up; and

WHEREAS, the existing “Norris-Todd” law lifting the ban upon the successful completion of the merger process adequately protects the interests of suburban municipalities, such that further interference in Shelby County affairs by the General Assembly is unnecessary;

NOW, THEREFORE, BE IT RESOLVED, BY THE BOARD OF COUNTY COMMISSIONERS OF SHELBY COUNTY, TENNESSEE, that the Shelby County Board of Commissioners hereby expresses its opposition to the enactment of SB2908 and HB3234, and urges the members of the Shelby County legislative delegation, and the Tennessee General Assembly more broadly, not to pass it.

BE IT FURTHER RESOLVED, that this Resolution shall take effect in accordance with the Shelby County Charter, Article II, Section 2.06(B).