Amid New Estimates of Increased Costs, Suburbs Vote for Referenda on Municipal Suburbs 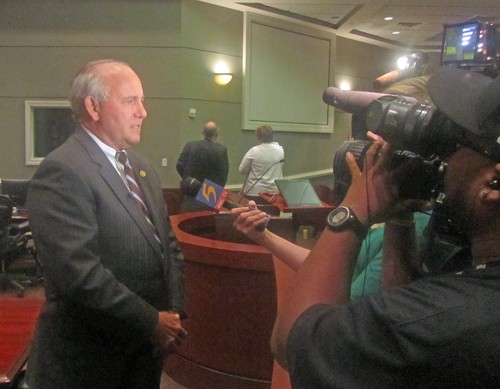 Faced with more than one set of estimates that it may cost their residents more than expected to fund new school systems, the governing boards of Shelby County’s six suburban municipalities went ahead Tuesday night and bit the bullet, voting to authorize enabling referenda on August 2.

Germantown, Collierville, Bartlett, Arlington, Lakeland, and Millington all approved ordinances to that end — most of them in a matter of minutes.

The reaction of Collierville Mayor Stan Joyner and the five members of the city’s Board of Aldermen may have been typical of the suburbanites’ determination to go their way, public-school-wise.

Although a decision to fund a proposed dog park at a cost of $135,000 required almost an hour’s worth of debate, and other items on Tuesday night’s agenda underwent considerable discussion, the several ordinances relating to municipal schools were disposed of as quickly as a county official could read them aloud and a vote could be taken.

Sequentially, the voting was unanimous to withdraw a holdover ordinance for a May 10 referendum which was canceled in March after an adverse ruling from the state Attorney General; to substitute an identical ordinance with the new date of August 2, in line with subsequent enabling legislation enacted in Nashville; and to approve a third ordinance establishing November 6 as the date for School Board elections.

A proviso in each of the new ordinances allowed for a change in the date in the event of litigation or other delaying circumstances.

After the vote, Alderman Tom Allen acknowledged that city officials had been advised several weeks ago, at a meeting of the mayor and aldermen with representatives of the Tennessee School Superintendents Association, that creation of “a great school system” would probably require more funding than a study by the suburbs’ consulting group, Southern Educational Strategies, had indicated.

Allen said the Collierville group were told, “Instead of using about $7800 per student, we probably ought to go to about $10,000.” But the city could begin operations without rising to that level right away, he said. “As you know, there are a lot of unknowns. And to come in and tell you it’s going to require this, it’s going to require that, nobody knows right now.”

Allen conceded that the possibility exists for a later rise in current estimates of the right property tax level. “We don’t know, to be honest with you. Anybody who tells you they do know is lying. These are unknown, uncharted waters.”

Mayor Joyner noted a state-required allocation of “the equivalent of 15 cents on the property tax,” and he said that figure, which would generate revenues of $2.1 million, would be exceeded by the city’s plan for a ½-cent sales tax increase that would rise upwards of $3 million.

“We told the residents that if we need more money, we’ll come to you for more money. Our residents have told us that they’re willing to pay what it takes. You know and I know that at some point there’ll be a tough decision to make,” Joyner said.

The Collierville chief executive said, however, that he didn’t take seriously recent estimates of suburban-school expense by Shelby County Commissioner Mike Ritz indicating that all of the suburbs would be put to far greater expense in creating a school system than their consultants at the Southern Educational Strategies group have indicated.

Ritz said he, too, had been apprised of the advice received by the Collierville government group at their meeting with the School Superintendents Association, and made a new calculation of increased expenses required in light of the recommended. $10,000-per-student figure.

Note: the figures below have been corrected from the previous, imperfectly transcribed version of a table forwarded by Mike Ritz: