Jeanne Richardson Soldiers On in a New District

Dispossessed of her District 89 by reapportionment, legislature's "most liberal" member takes on John DeBerry in District 90.

State Representative Jeanne Richardson (above, in video) was in her element on Friday at the intersection of Cooper and Young, conducting a press conference in tandem with City Councilwoman Janis Fullilove and Arkansas state representative Kathy Webb, the first openly gay woman to be elected to an official position in that state.

You have to give Jeanne Richardson points for coping. Imagine, first of all, having your birth name mispronounced so universally that you end up accepting the mispronunciation as the name itself.

“Jeanne” is meant to be pronounced like “Gene.” But the double ‘n’ led so many people, from her early teachers on, to sounding her name in two syllables, like “Jean-ie,” that that’s who she finally became.

Then, having been elected to the state House of Representatives from relatively liberal Midtown District 89, she became, arguably, the most liberal member of the legislature, on both social and economic issues. One of her daughters, noting that her 2010 opponent used just that phrase about her as a pejorative, expressed concern about the attack line, whereby Richardson told her, quite proudly, “Honey, I am the most liberal member of the legislature!”

But when Tennessee Republicans, as the state’s new majority party, laid their redistricting plans late last year, they in effect abolished Richardson’s constituency, shifting District 89 to Middle Tennessee and leaving her to find a (relatively) comfortable district to run in against another Democrat.

That turned out to be District 90, the majority-black bailiwick of John DeBerry, an African-American minister and businessman whose votes on social issues are as conservative as any Republican’s. The District also encapsulates numerous progressives and a significant gay population, though, and Richardson’s candidacy was as much a draft by this constituency as a willed action on her part. 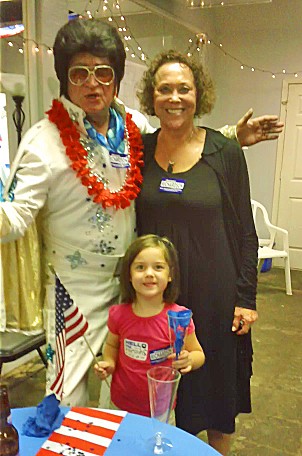 Campaigning hard with limited resources, Richardson saw DeBerry receive a Commercial Appeal endorsement she had hoped to get, and 9th District congressman Steve Cohen, who has epitomized pragmatic liberalism in these parts for decades, chose not to endorse in the District 90 primary, claiming friendships for Richardson, DeBerry, and a third candidate, Ian Randolph.

But she has numerous endoresements from prominent Democrats and active independents, both black and white, as well as from such staple organizarions as the Sierra Club, The Tennessee Education Association, and the Firefighters Association. And the Tennessee Equality Project is resolutely in her corner.

At one of her recent fundraisers, Richardson became philosophical about her efforts on behalf of gay rights. Not only were these rights worth defending in themselves, she said. So long as they were kept alive, artificially, as issues, they would be used as screens to obstruct citizens’’ views of economic inequalities. It was an almost Marcusian view of political realities.

Richardson soldiers on, against what she knows are long odds, and, though she is not loath to cite what she regards as wrong-headed DeBerry votes (against gay adoption rights, for example), she made a point on Friday of commending him for supporting the efforts of blogger/County Commission candidate Steve Ross, who dates her daughter Ellyn, in exposing the Election Commission’s widespread early-voting glitches.