GOP Delegates Spend a Day Hunkered Down at Home Base 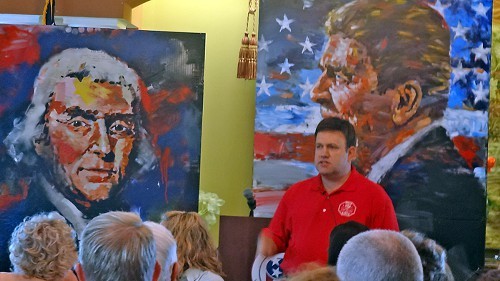 TAMPA BAY, FL --Technically, Monday was an off day for the Republicans in Tampa. The threat of being wiped by some spoor of Hurricane Isaac had caused Reince Priebus, head of the Republican National Committee, to cancel all official events for what had been scheduled to be the first day of convention activity.

In effect, the Tennessee delegation was confined to quarters at the Safety Harbor Resort and Spa, some five miles away from Tampa proper, across the ever-roiling bay waters via a narrow causeway. Some Tennesseans made their way across for private convention-related events. Most, not wishing to end up stranded in case something swelled up of a sudden or not possessing independent means of auto travel, stayed close to home base.

There were two events in the hotel itself on Monday — the traditional group breakfast, boasting speeches from state office-holders and celebrity guests, and a dinner honoring Lt. Governor Ron Ramsey and other members of the Republican legislative leadership.

Speaking at the breakfast were U.S. Senator Bob Corker, Chattanooga congressman Chuck Fleischmann, and, as a “surprise guest,” well-known pollster/consultant Frank Luntz. The latter worked the crowd like the political pro he is, mixing laugh lines and analytical nuggets. The highlight moment of Luntz’s remarks came when he asked the assembled delegates and alternates how many of them thought Todd Akin, the Republican Senate candidate in Missouri, should withdraw from his race.

Akin, it will be remembered, had made the breathtaking claim that women possessed the innate biological means to prevent pregnancy from what Akin, in an interview, had called “legitimate rapes.” Republicans from ticket leader Mitt Romney on down had called for Akin to step aside, and the delegation chorused its assent to that judgment.

All except for three naysayers— one of whom, State Rep. Joe Carr of Rutherford County, had previously made a $3,000 bid that won a brief auction held by Luntz for a large portrait of Thomas Jefferson. Looking straight at Carr, Luntz said, “I don’t know what you’re saying, but you can still have the painting.”

Carr would explain later on that he agreed with Akin that women did indeed possess certain biological means to close themselves off against pregnancy in cases of violent rape. He further thought that Republicans had no business telling a bona fide Republican primary winner what to do.

To no one's surprise, Luntz confirmed the consensus view that the presidential race between Romney and President Obama is a toss-up.

In his remarks, Corker made a point of addressing the issue of Medicare, simultaneously stroking vice presidential nominee-designate Paul Ryan, the Ayn Rand-loving congressman from Wisconsin who wants eventually for Medicare to become a voucher program. As below:

The dinner affair featuring Ramsey had originally been scheduled as a Tuesday lunch, but in the reshuffling of things had become a full-fledged evening banquet on Monday. Ramsey joked that his listeners, who originally would have been treated to a brief hour or so at lunch, were in for the whole ride now, and he gladly dilated on his prepared remarks.

A highlight of his speech was his recounting of how he came to be Lieutenant Governor in 2009 through the vote of former Democratic state Senator Rosalind Kurita of Clarksville:

Events scheduled for Tuesday, the convention’s official opening day now, include a showdown on some controversial rules changes and a prime-time address by Ann Romney, wife of the presidential nominee-presumptive.