With the Warm-Up Acts Completed, the Stage is Set for Romney

After Ann Romney, Christie, and Ryan, the man of many faces will have his main moment Thursday night. 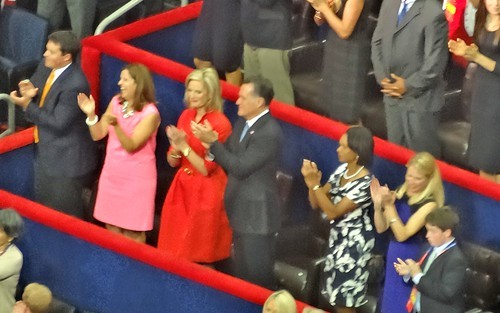 Romney’s acceptance address will not be his first extended moment in the tableau. He has already broken with tradition by spending the better part of a prime time evening in a highly visible red-rimmed box of sears on the floor of the Tampa Bay Times Forum. That was on Tuesday night, during an address to delegates by Chris Christie, the rotund and resonant governor of New Jersey, whose star turn was one of the few that have come close to upstaging the principal actor.

The other contenders in that regard have been Romney’s wife Ann, whose self-presentation as a plucky, attractive, and unexpectedly warm helpmate had immediately preceded Christie’s speech, and Paul Ryan, the angular, somewhat Ichabod Crane-ish ideologue of the Right who was chosen by Romney as a vice presidential running mate and who comes far closer than the presidential nominee himself to representing the core thinking at the heart of today’s Republican Party.

On Wednesday night, Ryan did better than most with a script that emphasizes themes of sacrifice and austerity rather than vaulting ambition. The anointed heir apparent is well-known in Congress as the author of a budget plan and transformational economic prospectus that would largely scuttle not only what remains of FDR’s New Deal and Lyndon Johnson’s Great Society but would significantly carve into the residual governmental apparatus left by Richard Nixon, creator of such add-ons as the much-denigrated Environmental Protection Agency.

“We can do this!” was the war cry intoned several times by Ryan to cheers from the GOP audience — the “this” being a dramatic regeneration of the American private sector, theoretically to be achieved by shrinking of governmental largesse and oversight coupled with increased incentives for a class that Republicans these days call “job creators” and whose members have historically been designated by various other names ranging from “captains of industry” on the high side to “malefactors of great wealth” on the low side.

With some justice, perhaps, Democrats at their party’s convention in Charlotte, North Carolina, next week will assail this GOP new-think as the same old trickle-down philosophy that ended in the financial debacle of 2008 that helped to usher in the tenure of Barack Obama as president.

Anticipating as much, Ryan was careful to suggest that the nation’s current troubled economy owed something to the big-spending ways of Obama’s predecessor, the unnamed George W. Bush, but, for obvious reasons, most of the blame was reserved for the current president, whom Ryan dismissed with patronizing scorn more than condemnations per se.

Ryan even posed as something of a tech-age hipster, gently mocking his ticket leader’s iPod preferences as elevator music and boasting, “My playlist begins with AC-DC and ends with Zeppelin.” (A thought: Inasmuch as this was generational outreach as much as true confessions, wouldn’t ZZ Top have gone over better with this crowd?)

As if fairly well know, the Republican rank and file of 2012 probably feels more comfortable with Ryan, the acolyte of Ayn Rand, than with Romney, the man of many masks, none of them thus far very revealing. The Wisconsin congressman’s task will be to broaden his message and his appeal, just as Romney’s will be to firm up his standing with the Republican base. (Obviously, his selection of Ryan was a large step in that direction.)

The opportunity for the Republicans has been harped on in every message from every speaker — the fact of a still stagnant economy and job market and the suspicion in many Americans’’ minds that the president doesn’t have a sure sense of what to do. That note was sounded by everyone who appeared from the rostrum.

The problem for the Republicans is how to make a message of sacrifice ad belt-tightening appealing. Much of the rhetoric at the convention has had a Valley Forge tinge to it, and the issue of more incentives for what Democrats call the privileged 1 percent is an unspoken anti-theme which does not speak its name here in Tampa Bay.

< /br> Ryan closes out his speech on Wednesday night.