Democrats’ Opening Night in Charlotte Was a Winner 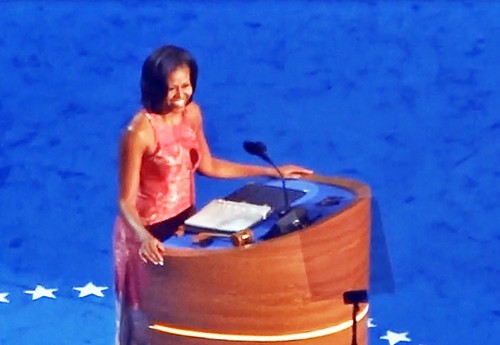 CHARLOTTE, N.C. -- There are all kinds of obvious reasons why national political conventions do not draw huge television audiences on mainstream television anymore — the proliferating number of other TV-watching options, especially on cable; the growth of social media for real political junkies; and much else in the technical realm, along with the fact that these quadrennial spectaculars long ago surrendered their original claim to viewership, a sense of drama based on legitimate suspense.

They are just coronations now, all their results pre-arranged, everything to be said and done scripted to fit a talking-points line, the sum total of which is redundancy writ large. As an example, now that the Democratic Party has toed up and decided to officially endorse same-sex marriage, every speaker on the Time Warner Cable Arena stage on opening night of the Democratic National Convention was outfitted with some basic variant of the phrase “whom they love,” as in “The Democratic Party believes that people should be judged by what they do, not by whom they love.”

The committee-vetted phrase and its variants are liable to become as ubiquitous this election year as “a woman’s right to choose” was in 1992, the year that Democratic nominees Bill Clinton and Al Gore (both recent converts to the pro-choice position) made a point of articulating the party’s freshly entrenched consensus on abortion. (In the vice-presidential debate that year, Gore taunted Dan Quayle to join him in proclaiming such rhetoric. “Just say it, Dan: ‘a women’s right to choose.’” I wondered at the time how Gore would have reacted if Quayle had summoned enough mischief to ask, “Choose what, Al?”)

Despite all the predictability of convention rhetoric, despite what would seem a near-certain guarantee of tedium, despite the dramatic audience fall-off since the days of contested conventions, despite the common-sensical decision by the networks to forgo all but an hour a night for a maximum of three nights for these affairs, there are still occasions when the public is cheated by not having full access to around-the-clock, gavel-to-gavel coverage in the old style.

Such a night was Tuesday, the DNC’s opening day, opened by a call to order from Debbie Wasserman Schultz, the DNC chair, and ending with an address by First Lady Michelle Obama. Even in the scrappy years smash-mouth contests at conventions, first days were rarely much to write home (not text, not tweet). But Tuesday at the DNC was well worth an extended look.

Among other things, useful videos about Jimmy Carter and the Kennedy family were shown to delegates in the late afternoon and early evening. History buffs, even diehard Republicans, might have enjoyed those. And as evening deepened, the fare became ever richer. (As my son Justin, in the arena watching with me, observed, the fact that Newark Mayor Cory Booker, a media-certified cutting-edger, was relegated to an early spot raised expectations about what was to come.)

One of the ways Democrats attempt to distinguish themselves from Republicans is by calling attention to what they see as a greater diversity.( Tennessee Democratic chairman Chip Forrister asked the members and guests on hand at Tuesday’s delegation breakfast to look around the room and see for themselves “the most diverse delegation in Tennessee history,” one that, in fact, was still predominantly white, though there was a liberal proportion of African Americans, along with a balance of genders and one certifiable transgendered person.)

Who would have thought that a former governor from Ohio named Ted Strickland would ignite fireworks. Yet Strickland, a kind of Gerald Ford lookalike with the same high-pitched voice, went out of the mold and delivered an old-fashioned Fourth of July partisan stemwinder. There were laughlines like “Mitt Romney never saw the point of building something when he could profit from tearing it down. If Mitt was Santa Claus, he'd fire the reindeer and outsource the elves” and passionate avowals like “President Barack Obama stood up for us, and now by God we will stand up for him,” and Strickland had the crowd buzzing.

After him came effective presentations from the likes of Chicago Mayor Rahm Emmanuel, the fiery former Chief of Staff for Obama; Massachusetts governor Duval Patrick; and Lily Ledbetter, the homespun worker lady who inspired the bill, pushed hard by the President, which mandated equal pay for equal work.

There were emotionally powerful presentations by a family whose lovely little daughter will require several rounds of open-heart surgery, a necessary ordeal made feasible by the Affordable Health Care Act (aka “Obamacare”) which GOP presidential nominee Mitt Romney is sworn to repeal, despite its close resemblance to the plan Romney sponsored as a one-term governor of Massachusetts.

(At the Tennessee delegation’s lunch on Wednesday morning, 9th District congressman Steve Cohen made a point of thanking Romney for his having supplied such helpful guidance and drew appreciative laughter. It was a serious point, though, and Cohen made note even of Richard Nixon’s relative liberalism within a Republican Party that in more recent times had stretched hard line conservatism to its limits.)

The keynote speech belonged to a fetchingly wry Julian Castro, mayor of San Antonio, who was introduced by his twin brother Joaquin, himself a political personage as a current candidate for Congress.

But the spotlight finally settled on Michelle Obama, and she delivered a version of herself that, in terms of likeability, was at least the equal of that which was achieved in Tampa last week by Ann Romney, and came off as somewhat more earthy and accessible.

There was talking-point stuff, to be sure: “Barack knows the American Dream because he's lived it...and he wants everyone in this country to have that same opportunity, no matter who we are, or where we're from, or what we look like, or who we love.”

But there were also authentically homey touches like this: “You see, even though back then Barack was a Senator and a presidential candidate...to me, he was still the guy who'd picked me up for our dates in a car that was so rusted out, I could actually see the pavement going by through a hole in the passenger side door...he was the guy whose proudest possession was a coffee table he'd found in a dumpster, and whose only pair of decent shoes was half a size too small.”

And, after a litany such remembered moments, Michelle Obama made it sound authentic when she said her husband’s definition of success was not about how much money you made but how much you could contribute to society.

On the bill for Wednesday night was a widely anticipated appearance by former president Bill Clinton, someone who has never been characterized, by friend or foe alike, as remote. It loomed as a big-ticket affair, almost as big as the climactic one on Thursday, when Barack Obama will deliver his acceptance address.

Bad news, though, for some of the throngs on hand in Charlotte: The President’s address, originally scheduled for the relatively spacious Bank of America stadium, has been moved indoors to the much smaller Time Warner arena to accommodate weather concerns. Ad hoc credentials will be at a premium, and somebody’s parade is going to get rained on.