Governor leaves some blanks, which he fills with fun facts and feel-good sentiments. 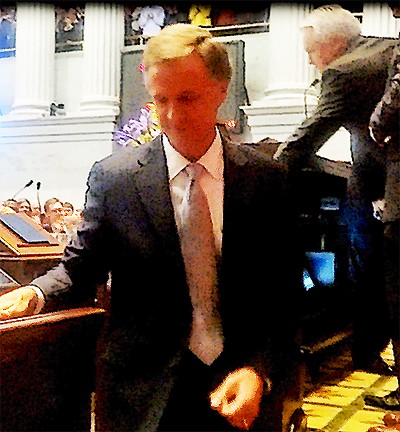 NASHVILLE -- Governor Bill Haslam, ever adept at walking political tightropes, managed several versions of the feat during his 2013 State-of-the-State address before a joint legislative session in the state House chamber and before whatever political junkies might have tuned in to a statewide multi-media simulcast.

On several key issues the governor expressed himself with studious ambiguity — notably on the still pending matter of Medicaid expansion under the terms of the Affordable Care Act. “Most of us in this room don’t like the Affordable Care act, but the decision to expand Medicaid isn’t as basic as saying, “No ObamaCare, No expansion,” he said. In other words, he was carefully weighing the issue.

On the one hand, “The federal government is famous for creating a program and then withdrawing the funds years later, which leaves state governments on the hook.” That was apropos conservative opponents’ expressed fears — embodied in new prohibitive legislation sponsored by state Senator Brian Kelsey (R-Germantown).

But on the other hand, “There are hospitals across this state, many of them in rural communities, that are going to struggle if not close under the health care law without expansion….” For “hospitals,” read: sources of serious lobbying efforts for expansion.

And, regarding proposed legislation to enable state vouchers for use in private schools (including a far-reaching variant by the self-same Kelsey), Haslam was able to thread his way through the controversial l issue without ever even using the word “voucher” at all. Still, the governor left no doubt that he would be pushing a “school choice” proposal, one that focused on low-income students, and he balanced that with boasts that he had greatly increased financial support — $47 million, over and above annual funding”—for the struggling schools that might lose students through a voucher program.

What was interesting about the SOTS address from the standpoint of audience reaction in the Chamber was that, every time Governor Haslam mentioned this or that new expenditure — $51 million for “technology transition upgrades in schools across the state;” $16.5 million for workforce development programs; $45 million for a new Community Health Facility at the University of Memphis; $58 million for new jails and prisons, etc., etc. — he got substantial applause from the supposed supermajority of GOP tightwads.

True, too, however, that the governor stressed whenever possible anything he could refer to as a tax cut — in levies on groceries, for example; or in the state inheritance tax (which he, admirably, declines to call a “death tax);” or on gift taxes; or in the Hall Income Tax — and he got the same prolonged applause.

Haslam briefly boasted his educational reforms and improved student performance on standardized tests. He touted a variety of public-private partnerships in the marketplace, and an increase in the number of state jobs. He circled around a couple of problem areas — issues within the Department of children’s Services, for example, concerning which he spoke mainly of “upgrading nearly 200 case manager positions;” and “guns and schools,” which he morphed into a call for “a larger conversation about mental health issues, identifying warning signs and getting people the help they need."

One of Haslam’s strongest stands concerned his support for stability in the state’s procedures for making judicial appointment. He noted that a pending 2014 referendum calls for modest changes and said, “I…believe that it makes sense to preserve the current process until the people have a chance to vote …. Making changes in the meantime does nothing but confuse the situation further.”

At the very onset of his speech, Haslam hit one inescapable issue head-on: “I believe we have to begin this evening by addressing the elephant in the room — or I guess I should say the elephants in the room. There are a lot of expectations and preconceived notions about how our Republican supernajority is going to govern….As we go through this legislative session, I ask everyone in this chamber this evening to keep in mind what Senator [Howard] Baker said: ‘The other fellow may be right….’”

And in the spirit of that suggested bipartisanship, the only significant modification made by Haslam in his prepared text was an ad-libbed recognition of Memphis state Representative and former longtime House Speaker Pro Tem Lois DeBerry for her 40 years of service in the legislature. That drew a standing ovation, as did several other tributes to various state employees whom he recognized for their superior performance.

In one sense, Bill Haslam’s State of the State message left a lot of blanks to be filled. But in another sense he filled as many as he could with what seemed to be encouraging data and honest feel-good sentiments.