CLASS meeting in Nashville reviews some 200 bills about to see action in General Assembly.

NASHVILLE — On the eve of a weekend retreat for the Shelby County Commission at which school matters will loom large and a Monday status conference on school litigation called by U.S. District Judge Hardy Mays, several pieces of legislation directly affecting the school impasse were hanging fire in the Tennessee General Assembly.

On Tuesday night in Nashville, members of the Shelby County Unified School Board held a reception for legislators at the downtown Sheraton. This was in conjunction with a meeting in Nashville of the Tennessee School Boards Association. 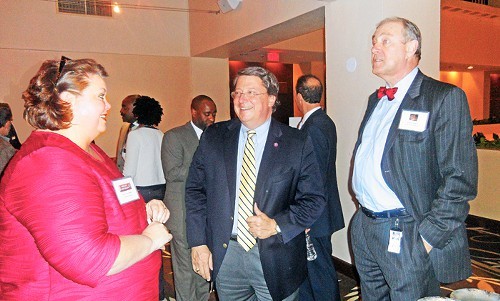 And on Wednesday, some key bills of direct import to Memphis and Shelby County drew special attention at a luncheon meeting of the Coalition of Large Area School Systems (CLASS), which consists of school board members from Shelby, Davidson, Hamilton, and Knox counties.

Opposition of CLASS members to the voucher and charter bills was clear and in conformity to the stated position of the parent TSBA, which was meeting in Nashville. Sentiment was also vocal against the municipal schools bill, with board members from all four participating jurisdictions stating objections.

The Warren motion was quickly supported by David Testerman (pictured here) of the Hamilton County board (Chattanooga).

Testerman agreed that the municipal-schools bill would undermine the integrity of unified county systems.
“Many of the things they are suggesting are the very things that would undermine the success you build, not only in Chattanooga but Nashville Metro also. You’re looking at two models that work,” said Testerman, and a Board member from Davidson County (Nashville) was quick to support Testerman, noting further that the trend in Tennessee had been to reduce the number of school districts, not enlarge them.

Indya Kincannon of the Knox County board weighed in similarly:

But, just as the Warren motion seemed about to carry, another member of the Shelby board, Kevin Woods, who represents an area spanning Memphis and its outer suburbs, noted that there was division of opinion in Shelby County and was successful in getting CLASS to defer stating an opinion until the Shelby board could meet and formulate its own.

Among other bills drawing negative attention from CLASS members were any and all measures enabling continuation of publicly funded virtual schooling. Members also approved a bill. SB798/HB113 (Beavers/Pody) revoking what many members had not realized was an existing ability by the state Education Commissioner to waive statutes having to do with charter schools and “cooperative innovative high school programs.”

They were advised by Robert Gowan and Elizabeth Merkel of Southern Strategies, which moderated the session, that the administration would probably see to the scuttling of that measure.