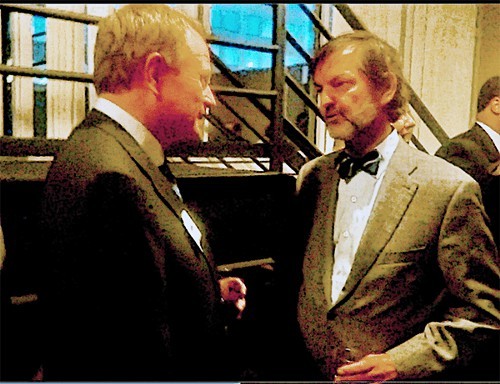 When you’re throwing a party for your new senior partner, it doesn’t hurt attendance when your new man becomes The Man of the Hour in the community at large.

That was the circumstance Thursday night for Caissa Public Strategy, a consulting, PR, and policy firm which began advertising a meet and greet for its newly named “senior director,” Rick Masson, some weeks ago.

By the time Caissa actually had its party going at its South Main penthouse address, Masson had acquired another new title, that of Special Master for the resolution of remaining issues in the merger of city and county schools. That was by order of U.S. District Judge Hardy Mays, who made the call in mid-week, and, while that certainly whetted public interest in Masson, it drastically curtailed what the well-known insider, a former CFO and CAO for the City of Memphis, could allow himself to say on one of the big issues of the day.

What, for example, did he think of County Commission chairman Mike Ritz’s op-ed in this week’s Flyer, the one that castigated an ad hoc working majority on the Unified School Board that Ritz saw as subverting the forthcoming city/county school merger. That would be the selfsame merger that Judge Mays had just tapped Masson to make happen.

“Oh, I read it, of course,” said Masson, “and last week I could have talked to you about it. But not now.”

Ritz was one of many guests on hand for the crowded affair, which took on the look of a Who’s Who of sorts, and what he’d had to say was the topic of many conversations, not all of them laudatory. Mike Palazzolo, for example, who serves as a Germantown alderman, found the Ritz Viewpoint several degrees south of “statesmanlike,” though he mellowed in his views somewhat when it was pointed out to him that Ritz had been just as critical of city representatives on the Unified Board as he had been of the suburbanites on it.

Palazzolo, a former Rhodes College football standout who at various points had been on the rosters of several NFL teams, spent a good deal of time reminiscing about the ups and downs of pro football with Liberty Bowl executive director Steve Ehrhart, a former executive with various teams and leagues which had a presence in Memphis.

One of the many things a bystander could learn from that conversation was the generic term for the team employee whose job it was, in the NFL and other football leagues, to inform players of nitty-gritty facts like their being cut from the roster. “The Turk,” such an individual was called. Maybe, if Masson has to play rough, it’ll serve as a moniker for him as well.

A conversation with Paul Morris, head of the Downtown Memphis Commission, proved illuminating on two points — the future of downtown parks with connections to Civil War history and the question of whether four big fish-logo signs should adorn the sides of The Pyramid when Bass Pro Shop completes preparations for its tenancy of the city’s iconic riverfront building.

Regarding the first matter, Morris, a native-born Memphian, said that in thinking of the Civil War, he identified with the winning side, the Union, that “we” meant and should mean the American nation, and that such a concept should be foremost in the minds of Memphians at large.

On the second issue, Morris, who had just presided over a forum of sorts with representatives of Bass Pro, opined that both sides had talking points. He agreed that Memphis had, in effect, beseeched Bass Pro to come this way, a fact that argued for indulging the giant corporation’s wishes, but he also noted that the community, through its local legislative bodies, had ponied up substantial sums on Bass Pro’s behalf, and that made the case for laying down certain strictures regarding display matters.

The community’s future was, in one way or another, the dominant topic of most of the conservations that went on in Caissa’s spaces Thursday night.

At one point, the aforesaid Mike Ritz was talking with well-known Memphis zoning lawyer Ron Harkavy and Harkavy’s wife Iris when someone observed that it would be a sign of economic good health for the community if Harkavy, who used to be a fixture at County Commission meetings, toiling for this or that construction-minded client, should regain something of his former ubiquity in the Vasco Smith county building.

“You know,” Harkavy said pensively, pointing a thumb at Ritz, who is mid-way in his second four-year term on the Commission, “come to think of it, I haven‘t made a single appearance before this Commission.”

O tempora. O mores. So it’s been that long since the boom years, has it?

Even so, there was an undeniable sense of enterprise in that and the other rooms at Caissa’s place Thursday night. Caissa co-founders Brian Stephens and Paige Walkup, external affairs director Kristi Stanley, and the other Caissa employees went all out to make the evening a success, and it didn’t hurt matters that they, like Bass Pro, had a big fish to show for their efforts. 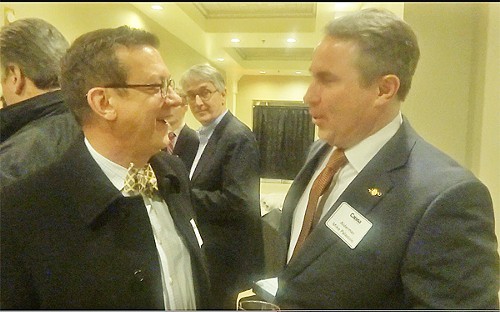