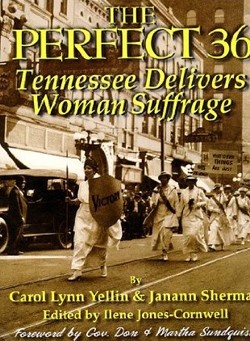 March is Women’s History month, and, appropriately, a new audio recording of The Perfect 36, which chronicles Tennessee’s 1920 role as the decisive state in passing the 19th or Women’s Suffrage amendment has just been completed

The reader is Janann Sherman, retiring professor of history at the University of Memphis and a co-author, with the late Carol Yellin, of the original volume, which was published in 1998.

Sherman, who chaired the history department at the U of M before retiring, will be moving to Vinalhaven island off the coast of Maine. Holder of a doctorate from Rutgers, she came to the University in 1994, a pivotal year in its history, one in which it changed its name and to some degree its mission. Sherman liked to say that she was hired by Memphis State University and came to work at the University of Memphis.

The indefatigable Paula Casey, a major facilitator not only of The Perfect 36 but of numerous other efforts to commemorate the suffrage movement and of women’s rights issues in general, says that, besides the audio version of The Perfect 36, an eBook version will shortly be published and will be available on Kindle, Nook, and Apple devices.

Both the EBook and the aud8io book will be carried by major vendors, including Barnes & Noble and Amazon.com, where copies of the original volume are still available.