A (Verbal) Shoot-Out at the AgriCenter Gun Show

In which our friend Mary Loveless takes a first-amendment stand against what she sees as second-amendment zealotry.

Periodically, there is a gun show in Memphis at the AgriCenter on the eastern fringe of Shelby Farms, and it never lacks for customers. On Saturday, December 22, last year, there was one there that prompted a visit from 58-year-old Mary Loveless, a former writer for Memphis magazine, one of the Flyer's sibling publications.

“[F]eeling moved by the obscenity I saw in holding a gun show one week after the Newton Massacre,” she had to go do something about it, as she explained in an email to the Flyer.

Loveless “went out to the AgriCenter and sat in my soccer mom chair, holding a poster that said, ‘This Bird Hunter and Mother Believes Nobody Should Own Assault Weapons.’ It was three of the most horrifying/depressing/fascinating hours of my life. I hadn't been "goddamn"-ed, called a fascist, or had semi-automatic weapons brandished in my direction in quite a while—like, never.”

That was then. This was now, in the week after there had been steamy debate on Capitol Hill in Washington (and at least a temporary cloture) regarding new legislation from the Obama administration seeking to require background checks at gun shows like this very one, which are exempt as of now from any such stipulation.

Mary Loveless, who supports the bill, which faces long odds against passage, but wants also to see one containing a ban on semi-automatic assault weapons, was out there at the AgriCenter again on Saturday to picket a new gun show, figuring that this show, like the one in December, would bring out big crowds because it, too, was being held at a time when the media were paying close attention to gun issues.

“That seems to bring them out,” she explained to me as I dropped by to say hello, long-time-no-see on Saturday. There she was, parked just outside the entrance to the gun show, sitting in the same folding soccer-mom chair, holding the same poster with the same message as in December.

I hadn’t seen Mary, — a sunny presence, the epitome of civic purpose and sincerity — in almost 20 years, and we got reacquainted as she began telling me about the research she’d done on weapons issues and the relationship, as she saw it, of easy availability of guns to the kind of murderous to-whom-it-may-concern violence that breaks out all too frequently in America these days.

Nobody had hassled her yet about her message and her presence there, she told me, but she was getting her share of looks from customers, many of them bearing weapons, whether going or coming. Some of the customers were buying, some were selling, and some, as I had resolved to do, were just looking.

Before I had a chance to go in and check out the scene on the arena floor, a uniformed sheriff’s deputy, one of two who’d been eyeballing Loveless, from the distance, some twenty feet away, of their parked patrol car, approached her and told her she’d have to move away from the entrance and even away from the parking lot area.

Mary held her ground, protesting that she had the first-amendment right to do what she was doing and that, after all, this was a public event. That point was disputed by the deputy, who told her the building and parking lot are often used for public purposes but in this case had been rented to a private individual, who had the right to control how the entrance-way to the event was used. The deputy seemed a bit tentative and uncertain about the tenor of what he was saying, but maybe he was just being polite.

As Mary was insisting on her first-amendment rights, a youngish, moustachioed man materialized in front of her, identifying himself as the individual mentioned by the deputy as the renter of the premises for the weekend, who had paid for the privilege to use them, and he insisted that Loveless was trespassing and obstructing his rights to conduct commerce.

She once again asserted her first-amendment privileges to put forth the message she had brought and said, “I’m not hurting anybody” The young man gestured toward her sign and said, “You’re hurting me by telling my customers that it’s wrong for them to have assault weapons.” And he asserted his own and their constitutional rights under the second amendment.

At a certain point, after all three parties had repeated their positions, the conversation ended with Mary still sitting there, her message sign still propped up for all to see. The renter had gone inside the building, the deputies had returned to their squad car, and one of them was dialing a number on his cell phone. It seemed clear that he wanted further instructions from a superior, and, directly, as Mary and I continued our conversation, a van arrived, bearing another officer, and conversatons between the three officers continued, more or less sotto voce, all the time I was there.

After a while, with Mary still holding her position, I went inside the arena to check things out, paid a $10 admission fee at a desk, got a red entry-stamp on my hand, and began circulating among the throng, looking along with them at the aisle upon aisle of booths with guns and knives for sale and all the appurtenances thereof and virtually anything and everything that related to weaponry, self-defense, aggression and a few things beyond.

Right off the bat was a table loaded with several brand-new looking specimens of a Bushmaster semi-automatic rifle -- C15, 223, with red-dot scope -- for a price, $999.99 that compared favorably to prices I would later see advertised for the weapon online.

A mean, efficient-looking weapon, and right next to it was a table loaded with magazine clips, most of them capable of holding 30 rounds, some of them 40 and perhaps more.

All of these, and like items, were multipied seemingly a thousand-fold on table after table. Oddly, there were tables of used books, with offerings ranging from Cold Steeled Challenge, 3 vols, which turned out to be a DVD collection, memoirs of military figures and politicians, titles ranging from Wagner’s Hitler to Women and Love by Sheree Hite.

At the beyond-the-pale end of things, there was a table bearing the sign, “If You Voted for Obama, We Don’t Want Your Business. You’re Too Stupid to Own a Gun.” Another one nearby featured framed insignia under the head “Deutsche Wehrmacht,” and there was one, with a sign advertising “Splattered Targets,” boasting a rack of brightly colored cartoon prints of, yep, blood-splattered images at $1.00 a copy. 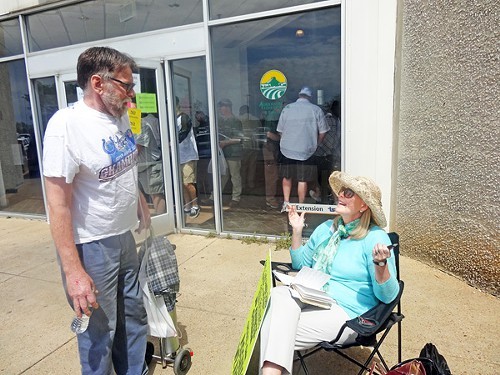 Outside Mary Loveless was still holding her spot. She and I resumed our conversation, and as we did, a T-shirted man approached her. We both may have sucked in a breath, but the man started pleasantly enough: “Ma’am, I agree with you. I wouldn’t care if they didn’t carry any assault weapons in there, neither. I’m just as redneck as they come, and I think our army’s got enough of them.”

Mary was delighted at this spark of apparent agreement. She smiled and responded with one of her well-researched, well-rehearsed arguments, “They don’t want any for hunting or sport. They are arming themselves against our government….”

“Yeah, that’s it,” the man said. “Our United States government, they done ripped us off. We do’t own nothing. If China come over here right now and demanded what we owe ‘em, we couldn’t pay ‘em.”

Stunned only momentarily, Mary picked up on the last part of that. “We know that….”

But the man was continuing, “If they brought their army over here, they’d blow through us like a lawnmower. There’s too many of them.”

I ask the man his name, and he answers, affably, “Robert Kelly.”

Kelly tells me he is a vendor, at the gun show to sell weapons, a fact which the back of his T-shirt explains in detail (see image). “I sold a 500 magnum, “ he explains, turning around and flashing the message on his shirt. “Big ole pistol. Sounds like a cannon. Yeah, I got my pistols here.”

He goes on to say, “I like to target shoot. Even if somebody broke into my house, I don’t think I could shoot ‘em.” And there proceeds something of a classic stichomythia, a rapid-fire dialogue.

Mary: “I have thought a lot about this scenario, and I…”

Kelly: “If they tried to kill me I guess I would shoot ‘em.”

Mary: “...I could not shoot anybody with a handgun because they’re not accurate….”

Kelly: “Well, they have to be right up on you.”

Mary: “But I can defend myself and would, with a shotgun….”

Kelly: “I don’t care nothing about an an assault gun.”

Mary:” …why they have a need to have one, and everybody I ask that question to, and I’ve been asking it since December, nobody will answer it, they….”

Kelly: “They know when China’s gonna come. It don’t matter how many they got, they’re gonna wipe us out.”

Mary: “…and I had a fellow tell me point blank today that he thought the purpose of the second amendment was to arm yourself against your own government….”

Kelly: “It’s to take our government out if they get too big, but, see, it‘s too late. They done already got too big. They got the military on their side.”

Kelly: “That’s what the amendment says. If you read it close it says we can protect our self from our own government.”

Kelly: "I grew up in the 60s and smoked pot and LSD and all that stuff. Got my brain…it’ ain’t what it used to be or could be."

At this point in the dialogue, a friend of Kelly’s has arrived at the entrance to the arena, and the two say hello and exchange slap handshakes.

Kelly and his friend make conversation about the pistol the friend has brought with him, an oversized handgun with a long magazine clip extending from it, an “assault pistol,” Kelly will explain later. The friend is there to sell the gun.

In something of a non-sequitur, Kelly tells him, “We don’t need no assault weapons.”

The friend shrugs, “Well, I got several.”

Kelly says, “When the Chinese army gets over here they’re gone go through us like a lawnmower anyway.” Now he shrugs. “You’ll go down shooting anyway.”

He turns back to Mary Loveless: “I appreciate what you’re doing. But it’s all kind of useless. Nobody will listen to you, will they? Every once in a while they might.”

She tells him. “I’m not trying to take their guns. It’s not an all-or-nothing thing.”

Directly, the sheriff's deputy comes over to Mary and tells her he's checked the situation out and, "You're fine to stay."

And not long after that, the man who'd identified himself as the renter of the faciity comes out to smoke a cigarette with a buddy, who nods toward Loveless and says in a stage whisper: "Can we get rid of her?"

Mary listens close and hears the renter to say disgustedly, indicating the deputy, "Nah! He loves the bitch!"