Chris Cillizza says our congressman just had “the worst week in Washington.” Really? Because of that Cyndi Lauper thing? 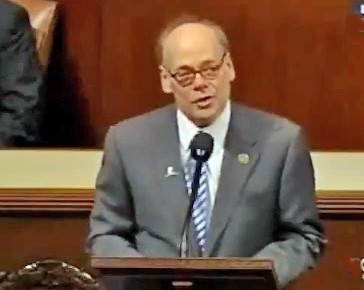 When I lived in Washington for a while in the early ‘80s, working on Capitol Hill there, I was convinced that The Washington Post was the greatest newspaper in the world — bar none, including the vaunted New York Times, itself not too shabby.

Part of that, of course, was that the Post covered politics — national, international, even local — like nobody’s business. Politics, of course, was and is the business of Washington, which is something of a company town. But the paper’s excellence transcended that with a comprehensive “Style” section, for example, which could have lessoned the Times on how to handle issues of lifestyle and taste — and probably did.

I don’t get to see the paper much anymore — we don’t have street editions down this way — but I keep encountering published jeremiads in which various pundits lump the Post in with other progressively weakening print icons.

I do see many of the Post’s offerings, though, either in syndication or in various web forms, delivered via social media or ordinary emails, and I am familiar with Chris Cillizza’s byline.

Until this weekend, I had no sense that Cillizza was anything other than your usual competent Washington politi-scribe. However, I am — how to say it...bemused — after seeing his Saturday article entitled “Who had the worst week in Washington? Rep. Steve Cohen (D-Tenn.)”.

Really, I thought. With all the controversy going on up there about gun legislation, immigration, and the still unresolved sequester mess, and all the stupid things said and done in pursuit of those conundra, Steve Cohen, our own irrepressible 9th District congressman, had the worst week in Washington? So what’d he do?

Cilliizza went on to give a sketchy, even cheeky review of the relevant situation involving Cohen. Here’s a key paragraph:

“On Sunday night, he [Cohen] attended the White House’s tribute to soul music and, afterward, tweeted at Cyndi Lauper — of 1980s rock-pop fame — “great night, couldn’t believe how hot u were.see you again next Tuesday.” He then immediately deleted the tweet.”

There was, of course, a reference in Cillizza’s column to a previous well-publicized tweeting incident involving Cohen.

“… [T]he congressman had drawn attention by exchanging tweets with a 24-year-old model in February. Cohen later explained that the woman in question was his daughter, whom he had found out about just three years ago.”

Fair enough. As we said in our own account at the time, nothing

…could have prepared most of us for the ultimate Cohen bombshell, delivered Thursday to local TV stations and almost certain to be a news item everywhere as news-gatherers in the nation and around the world catch on.

The young woman was Victoria Brink of Houston, who had tweeted Cohen during Tuesday night’s State of the Union address and was tweeted back twice with endearing messages from the congressman, ending with the initialed phrase “ilu” (for “I love you.”)….

And the reveal was stunning:

Steve Cohen, a perennial bachelor (though he has squired many a handsome lady) is a father, and the 24-year-old Brink is his daughter.

Meanwhile, though, those “ilu” references had generated all manner of howls from aroused citizens, censorious and leering alike.

As we patched together our own account, we skimmed through the backstory, involving a long-ago liaison Cohen had been involved in with the mother of Miss Brink and his surprise discovery of his offspring’s existence only three years earlier, and arrived at the simple conclusion that the congressman, — the “proud papa,” as we put it — should be congratulated .

(That was not enough to satisfy some, including a local activist who had soured on Cohen and, in following our progress in documenting the Victoria Brink story, suggested first, hopefully, that we were “digging for dirt,” and later, disappointedly, that we had come up with a “fluff story.” Oh well, as Ricky Nelson, among others, done tole us, “you can’t please everybody.”)

To the present: Cillizza’s article about this past week’s incident notes that Cohen’s tweets to Lauper were related to her participation in a tribute event to Memphis soul music at the White HouseI and goes on:

“It turns out that the episode with Cohen’s daughter was directly tied to the Lauper incident. Cohen, seeking some payback, said Friday he purposely wrote and then deleted the tweet to Lauper — knowing it would pique the media’s curiosity and allow him to talk more about an upcoming PBS documentary on soul music in Memphis.

As motives go, that does seem a bit far-fetched, and it was all Cillizza needed to make his point — “that point being that a member of Congress can still act like a high school kid time after time.”

OK, but that does seem like pretty thin gruel for Cilizza to serve up for his modest little “worst week in Washington” gala. Is that really as bad as things got for any member of the national government complex last week? Really? Then we should rejoice that things up that way are not nearly so bad as they have seemed. Let’s have a party, a feast of national celebration, and do it on the Mall.

Back in 2009, I did an “exit interview” with then Memphis Mayor Willie Herenton, who was about to leave office early and — somewhat incidentally and futilely, as it turned out — to challenge Cohen’s reelection to Congress in the 2010 Democratic primary. In that interview, Herenton delivered up that interviewer’s dream, a fireworks quote that would draw attention to the story and go on to have an incendiary life of its own:

As he said those words, I reflected on how many people might agree with the mayor about Cohen’s state of imperfectness, though “asshole” might not be their exact word of choice.

Congressman Cohen — who, it should be noted, has been reelected three times, each time with a more resounding majority — is somebody who gives as good as he gets, and, to paraphrase Herenton, those of us who have known him for a while are more than aware of his foibles, several of which have been recounted in our spaces or at least alluded to, sometimes between the lines.

Members of his staff have learned to watch, with some trepidation, for what they know is the first sign of trouble for Cohen on the stump — when the remaining strands of hair on his now balding pate begin to rise.

That happens reasonably often, but if a foot occasionally gets into his mouth, so do words of eloquence and wit, as when, during his aforesaid “worst week,” Cohen rose Tuesday on the floor of the House to extol what was then the forthcoming “Memphis Soul” celebration. After citing the fact that Memphis was a “great reservoir of the nation’s music history” and that the city’s music was a “living, breathing part” of American culture, Cohen offered President Obama some advice:

A number of eminent Memphis musicians would be on hand for the celebration, the congressman noted, including “Justin Timberlake, Mavis Staples, Charlie Musselwhite, Ben Harper, Sam Moore of Sam & Save,” but among the unavoidably absent would be the great Al Green. Therefore, said Cohen, suggesting a reprise of one of Obama’s choicest public moments, the President “will have to do ‘Let’s Stay Together’ by himself.”

Later in the week, amid the fuss attendant to his much-noticed tweet, Cohen would address the House with a public “shout-out” to the aforesaid Cyndi Lauper, citing her 2010 album, Memphis Blues,” and a song from that album, a cover of the late Otis Redding’s “Try a Little Tenderness.” He then recommended that lyric to his colleagues as a specific for what ails them.

It might work also for Chris Cillizza, for whom we wish another good week in our nation’s capital, that apparent oasis of carefree easy living — troubled recently, it would seem, only by our local congressman’s sincere tributes, whether “flirty” or not, to a musical artist he admired.