For decades, she was at the center of social progress — in the schools, work force, and political structure of Memphis and Shelby County. 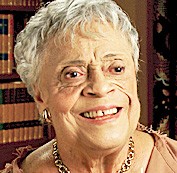 Maxine Smith, the longtime executive secretary of the Memphis NAACP and a pivotal local figure in virtually every important aspect of the civil rights era, has died at 83.

Smith’s slipping of the mortal coil is sure to be formally recognized and her life commemorated by local, state, and national legislative bodies, for there is hardly as aspect of the times she lived in that she didn’t do much to transform.

As in the case of Rosa Parks, whose denial of a seat on a Montgomery bus in 1956 led to that city’s landmark bus boycott, led by the young Martin Luther King, Smith’s ascent into social leadership stemmed from a personal rebuff.

She and Miriam Sugarmon Willis, another civil rights pioneer, saw their applications rejected to do graduate work at Memphis State University in 1957. That led to Smith’s involvement with the NAACP and her activity on behalf of sit-ins and various protests and voter registration drives.

She led the "If You're Black, Take It Back" campaigns that boycotted downtown stores with segregated work forces and separate water fountains. She personally escorted the African American children who desegregated Memphis public schools in 1961. In 1969 she was a leader of the “Black Monday” boycotts to force further school desegregation.

As a leader of the NAACP, Smith was outspoken in support of the 1968 sanitation workers’ strike, which would culminate in the tragic assassination here of Dr. King.

Having been elected to the Memphis School Board in 1971, she was the single most important factor in the elevation in 1979 of Willie Herenton, a black principal, to fill the vacant position os school superintendent, organizing resistance on the Board and in the city to a Board majority’s plan to hire a white superintendent from Michigan.

Smith was equally influential in the 1991 mayoral campaign of Herenton, who won and became the city’s first elected black chief executive, just as he had been the school system’s first black superintendent.

Speaking of Smit on WREG-TV Friday, after learning of her death, Herenton, now organizing a charter-school network, credited Smith for being a major force for “the advancement of African Americans,” and said, “When the annals of history are written … Maxine Smith’s name will be there. She made an indelible imprint on this city.” A tearful Herenton acknowledged that he would never have become superintendent of schools “if not for the courage of Maxine Smith.”

Perhaps appropriately, Smith was elected president of the School Board the same year, 1991, that Herenton was elected mayor. She left the school board in 1995 and eventually relinquished the reins of the NAACP, but continued to function as a sort of elder stateswoman, speaking out on issues and offering advice whenever she was consulted by either side to a controversy, which was often.

She remained an inspirational figurehead, as did her late husband Vasco Smith, a veteran civil rights activist himself and a longtime member of the Shelby County Commission, which meets now in a building named for him.

Speaking of Maxine Smith's death on the floor of the U.S. House of Representatives Friday, 9th District congressman Steve Cohen said, "Today in Memphis, Tenessee, a great lady passed, a lady who was as fierce, as brave, as courageous as any woman who has ever lived in this country...She helped take Memphis beyond Jim Crow and segregation... and she helped take America there...."