It was a typical memorial service, in a way. A preacher, the Rev. Keith Norman of the host church, First Baptist Church on Broad, officiated. Interspersed with the testimonials to the deceased, Lois DeBerry, were hymns sung — actually, belted — by such artists as Deborah Manning Thomas.

And the testimonials themselves came from the people who had known DeBerry, mainly from her four decades of prominence as a member of the Tennessee House of Representatives.

This was a lengthy and — as befitted the stature of the longtime House Speaker Pro Tem — influential list, beginning with a former vice president of the United States, Al Gore, and continuing through other such personages, including a current governor, Bill Haslam, and a past one, Phil Bredesen, and concluding with DeBerry’s surviving husband, Charles Traughber, who, until his retirement late last month, had been chairman of the state Pardon and Parole Board.

Gore, for whom DeBerry had made a nominating speech for president during the 2000 Democratic National Convention, returned the favor in good style, establishing that DeBerry was a role model par excellence, one without a “mean bone in her body.:”

Other speakers would expand on that image and, on occasion, put it in bas relief, making sure it was realized that Lois DeBerry, who pulled her legislative oar non-stop during her four-year battle with pancreatic cancer, was a fully round character.

There was former House colleague Roscoe Dixon, for example, looking white-haired and distinguished, seemingly recovered from the career derailment of his involvement in the Tennessee Waltz sting and the years of incarceration which followed. As others, notably the two governors, had done, he testified to DeBerry’s sense of authority, which co-existed with the charm of the late legislative eminence, who genuflected to nobody.

If you crossed her, “she could put you on ice,” noted Dixon, and the appreciative murmurs that rose from several parts of the ad hoc congregation indicated that many others knew this well, not excluding the longtime boss of the House, Speaker Emeritus Jimmy Naifeh, who in his turn spoke of having to endure a month of not being spoken to by DeBerry as a result of some dereliction on his part.

That was one of the things that made this memorial service atypical — the obvious resolve of the speakers to illuminate as many corners of DeBerry’s personality as possible, as if by doing so she could be revivified. 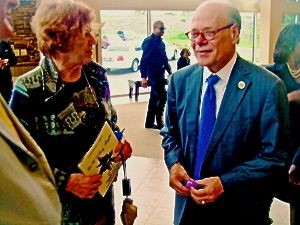 There was a Big Chill aspect to the service, a gathering of the guard, a Last Hurrah for the luminaries who had constituted Tennessee state government during the long span of DeBerry’s career, a passing in review, as Memphis state Senator Jim Kyle would describe it, for the state’s Democratic Party, leading members of which were there in numbers too great to single out by name.

Yet it was more than that. One of the more memorable moments came from a leading figure of the state’s new Republican guard, current House Speaker Beth Harwell of Nashville,
who spoke with obvious fondness of DeBerry as the creator of a template for herself and others and as an arbiter of style.

There was the time, Harwell somewhat ruefully told her fellow attendees, that the Chamber seemed unduly warm, and she shed her outer jacket while presiding over the House. “At that point, I saw Lois headed up the aisle....She tapped me on the shoulder and pulled me aside and said, “Girl, Michelle Obama you are not! Cover up those scrawny arms. So I did.”

In a voice swelling with emotion, Harwell talked about DeBerry having her back on some important children’s issues and recalled watching her use “her tenacious spirit” to fight cancer. “At times, when I knew she was tired, and when I knew she was in pain, she weas still at the Capitol working, with a smile on her face. She taught us how to live, and she taught us how to die. What a legacy. Tennessee has lost a political icon. And I lost my friend and my mentor.”

There was more testimony from more dignitaries, and praise for this and that, especially for her contributions to prison reform, but the simple concept of Lois DeBerry as tireless friend and mentor to the people and state of Tennessee was the dominant leitmotif of the occasion.

One of the final speakers was Naifeh, and — politics being politics, and this, remember, was predominantly an audience of politicians, there was a modest and somewhat public controversy. The Speaker had wanted to speak earlier and thought his long and close relationship with DeBerry over the decades entitled him to that, and he wasn’t really mollified when Rev Norman pointed out that he had saved Naifeh for the last group because it in fact included some of DeBerry’s true intimates, it included, for example, her husband, Charles Traughber, who , appropriately, would have the last word.

Naifeh went on a bit and acknowledged the fact when Norman spoke in his ear, asking him to expedite his remarks. And the former Speaker of the House complained — jesting, it seemed — about being speaker Number 15, whereupon the minister — jesting, too, it seemed — responded that “next time” Naifeh would be even further down the list. Whatever that meant.

Well, maybe they were jesting, and maybe they weren’t. It was, in any case, a nice break in the proceedings, each man had a little justice on his side, and the congregation seemed to take to it all right. In any case, Jimmy Naifeh, a tough but sensitive man, got to say, at the end, after he had recapped Lois DeBerry’s achievements a time or two, that he had “lost my best friend.”

The remark rang true, as the mini-debate between the Speaker and the minister had, too, and one could almost imagine that Lois DeBerry would have appreciated the sentiment as well as the give-and-take. It was possible, in fact, to imagine her taking it all in with her famous smile, just as she did in the hurly-burly of the Tennessee House of Representatives for 40-odd distinguished years.