Speaking to Tennessee Democrats in Nashville, Memphis’ mayor tries to inspire them with a childhood story about how he got wounded in a sensitive place by a billygoat. 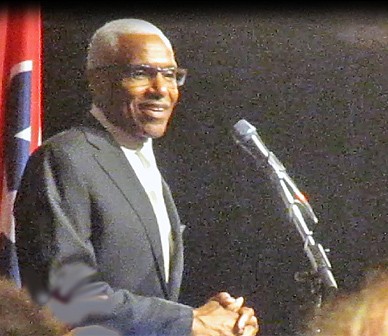 NASHVILLE --In the course of this year’s well-attended and unexpectedly enthusiastic annual Jackson Day Dinner Saturday night in Nashville, Memphis’ A C Wharton, one of four big-city Democratic mayors who spoke to party members from the dais, took an unusual tack by way of encouraging the rank-and-file Democrats who made up his audience.

Suggesting that some of the party’s recent lean years at the polls should be regarded merely as instances of of the Democratic Party’s “backing up” in preparation for great leaps forward. the mayor told the crowd at the Musicians Hall of Fame and Museum this story, which his listeners rewarded with rapt attention and appreciative laughter:

“It reminds me of what happened when I was growing up in Lebanon. My daddy always said, ‘When you see an animal in trouble somewhere, suffering, go and help the animal’….I was walking home one day,and there was this billygoat up inside a fence...He had stuck his head out of the wire, which was easy to do since his horns went backwards, but guess what? Once he got it there he was hooked.

“So I did what my daddy said. He said,’If you see an animal in trouble, go and help the animal.’ So I go up and I commence to trying to help the old billy goat….He was backing up. ...He was gettin’ ready, all right. About the time I got real close to helping him is when he let it all out. And , of course, I was standing about this tall and you remember where his head was, and you can imagine where he hit me!

“Ruby tells me I got a bunch of boys at home, but, after where that billy goat hit me, I don’t know whether that’s true or not…..[But] that’s what we’re getting ready to do. Y’all remember that old billygoat. We’ve been backing up, but we’re gettin’ ready!...”

(More stories and reports from the Jackson Day weekend will appear online and in this week’s Flyer issue on the stands.)