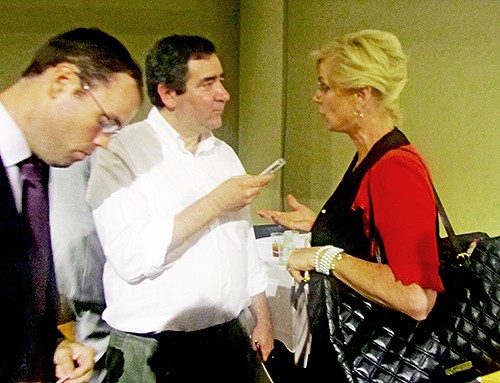 Sara Kyle, the wife of state Senate Democratic leader Jim Kyle (D-Memphis) and a public figure in her own right from a once powerful Tennessee political family, just may be on her way into the political limelight again — as a Democratic gubernatorial candidate in 2014.

Without doing anything more than attending last Saturday night’s annual Jackson Dinner for statewide Democrats in Nashville, Kyle was a dominant personality at the event.

The longtime former member of the now sunsetted Tennessee Regulatory Authority was hailed from the dais by state Democratic chairman Roy Herron and others as a probable party standard-bearer next year, and responded to the crowd’s chant of “Run, Sara, Run” with a smile and broad waves.

"Run, Sara, Run" is also the working name of a website and draft movement, largely based in Memphis; three of its principals — Matt Kuhn, Michael Lipe, and Steve Ross — were on hand Saturday night and basked in Kyle's reception by the crowd.

Kyle certainly is no stranger to politics. She was born into the extended Clement family, a niece to the late eminences Frank Clement and Annabelle Clement O’Brien -- a former governor and a state senator respectively, each for several term -- and cousin to former congressman Bob Clement.

She has also held public office herself, winning races for City Court judge in Memphis and for the old state Public Service Commission. When the PSC was transformed in the ‘90s into the non-elected TRA at the behest of former Governor Don Sundquist, Sara Kyle was appointed to the new agency and remained a member until resigning this year when administration-backed legislation limited the TRA’s scope and made it part-time.

In a later conversation with the Flyer and other media after last Saturday night’s event in Nashville, she would acknowledge a clear interest in running but would stop just short of declaring.

Pointedly, she declared no animus toward Governor Bill Haslam, her potential adversary. “I personally have never met Governor Haslam. I’m sure he’s personally well-liked I some sections of the state….I’ sure he’s a fine person. I understand his wife is from Memphis, and they’re well liked down here. But business is one thing and popularity is another.”

She continued: “I don’t agree with Governor Haslam on a lot of issues.” One of those concerned her own former agency, the TRA. “In his judgment he decided to abolish a consumer agency and make it part-time. Certainly I feel the citizens need a full-time service…an agency that will listen to them, take on problems and solve them.”

Kyle said that “citizens listened to me” in her earlier runs for office, and, in turn, “I sure listen to them.” Specifically, “in jobs where the rules are changing, they want me to hear them and listen to them.” In an apparent reference to Haslam’s decision not to accept Medicaid expansion funds, she cited “federal monies that are not coming into our state help our citizens, that are being blocked.”

She declined to delve into the particulars of that and other issues, emphasizing again that her current role is to “move about the state, listening to people.” Her de facto listening tour would last “for a few more months,” said Kyle, and for the time being she had no specific announcement plans.

If and when she did decide to run for governor, she expected to lean heavily on the help and advice of her husband, “one of the brightest political minds I’ve ever known.: Senator Kyle had launched a tentative gubernatorial candidacy in 2009 but suspended it some months later when he foresaw the Republican electoral tide of 2010. She was asked: How would her own experience be different?

“That was a different time,” she said, noting further that, as a PSC candidate in the ‘90s she had already had the experience of running a successful statewide race.

Kyle noted that her childhood was in Kingsport in East Tennessee, that she had finished high school in Dickson in Middle Tennessee, that marriage had brought her to Memphis, where she raised four children and won her judgeship, and that, from 1994 on, her state job had given her a wide focus.

“I’m a Tennessee woman,” she declared, and she sounded ready to demonstrate it on the stump.