Milestones Were Reached Within the Past Week...

...by advertising maven John Malmo and funeral-home innovator Harold Ford Sr., each of whom has, in the not so distant past, taken a turn or two in local politics. 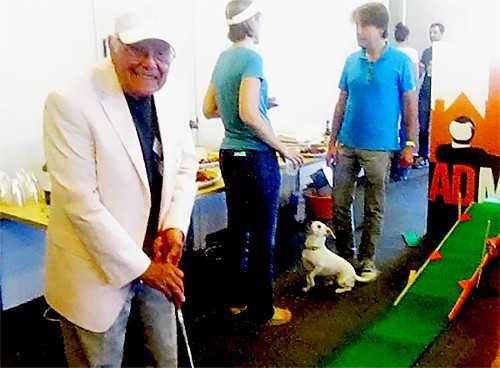 ***by advertising maven John Malmo, who observed his 80th birthday on Sunday and was honored by his employees with a birthday party the preceding Friday. The affair, complete with cake and party favors, included a 9-hole game of miniature golf, which took place on the several floors of the downtown Union Avenue site inhabited by archer-malmo communications and the Cotton Museum.

Here Malmo (above) prepares to finish up on the 9th hole (4th floor). He later took time to reminisce about his off-and-on relations, personal and professional, with various political worthies, ranging from 9th District congressman Steve Cohen — with whom Malmo feuded, to the point of handling the advertising for the largely nominal and symbolic candidacy of Cohen’s 2012 Republican opponent, Charlotte Bergman —to former Mayor Willie Herenton, whose first several mayoral campaigns Malmo assisted with.

Bergman would finish well behind Cohen, as Malmo and virtually everyone else expected. “Just as well,” commented Malmo, who harbored no illusions about the candidate or her chances but has remained vexed with Cohen (and with businessman/philanthropist Avron Fogelman).

The issue was one of disagreements with the two over what Malmo, then chairman of the Park Commission board, regarded as too lenient rental terms arranged by the pair for the then Houston Oilers to sojourn briefly in the Liberty Bowl on their way to becoming the Tennessee Titans in Nashville.

**by former long=term 9th District Congressman Harold Ford Sr., who held Open House last Friday at the Sycamore View site of his new state-of-the-art Harold Ford Funeral Chapel . The new facility is but the precursor of the even more futuristic Serenity Columbarium and Memorial Garden, to come later via expansion.

In what was his last post on his City Beat blog, my colleague John Branston talked with Ford and gave details of what is to come.

Here Ford is discoursing on his plans to state Representative Larry Miller, one of scores of plugged-in p9litical and civic types who paid a visit to the Open House.

In a separate conversation with me, Ford was reminded that, during his second trial for bank fraud in 1993, he accounted for a controversial loan from the Knoxville-based Butcher banks by stating that his purpose had been to build a “world-class funeral home

The jury had believed him and acquitted him, and here he was, after a lucrative intervening career as a blue-ribbon lobbyist, apparently on the way to achieving his goal. Clearly pleased with the memory, Ford said, “I’m glad you remembered that.”