The Pre-K Debate: Costs Versus Effectiveness

Memphis voters have heard both sides of the argument and will resolve the fate of a half-cent sales tax referendum on Thursday. 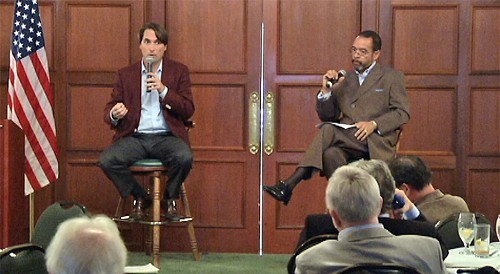 “We have to pay for things we need and things that will improve our city. Pre-K is one of those things”: That was how Shea Flinn, co-sponsor with City Council colleague Jim Strickland of the 2014 half-cent sales-tax ballot initiative, began his climactic public appeal on Tuesday.

That was in a one-on-one debate format with the Rev. Kenneth Whalum Jr., a leading referendum opponent, before a Memphis Rotary Club luncheon audience at the University Club. Some 40-odd minutes later, in his conclusion, Whalum objected, “In what by any standard is the poorest big city in the United States, with one of the highest illiteracy rates, we must not further burden the children of our city and their parents.”

In the half-hour plus of dialogue that was book-ended by these remarks, the two main concepts embedded in the referendum were amply vented: the value to Memphis children of a proposed city-wide pre-Kindergarten program vis-à-vis the price taxpayers would have to pay for it.

Flinn emphasized the former, Whalum the latter. Flinn insisted that the referendum carried with it an “iron-clad guarantee” that the monies raised — somewhere in the tens of millions of dollars annually — would go into a touch-proof fund reserved primarily for pre-K and secondarily for property-tax reduction. Whalum responded that the language of the referendum focused not on pre-K but on the fact of a sales-tax increase, and that, he said, was what voters were being asked to cast their ballots for.

Flinn maintained that studies showed that pre-K was beneficial and would yield long-term economic results and that every dollar spent would “give you five dollars back.” Whalum said the proposed half-cent sales-tax increase was regressive, a further indignity heaped upon the poor, and that opponents of the referendum, like himself, were “for pre-K,” but “against this means of paying for it.”

Whalum was not all that sure what the various studies of pre-K had shown, for that matter, suggesting that claims of lasting benefits, especially beyond the third grade, were “unproven.” And, for his part, Flinn insisted that property taxes, the other basic financing method available, was perhaps as regressive for Memphians as the sales tax, especially since tourists and people who lived elsewhere but worked in Memphis helped pay the latter.

In a variety of ways and by various yardsticks, the two weighed advantages against costs. Pointed but thoughtful, their thrusts and counter-thrusts were a recapitulation in miniature of a longer, more wide-ranging and often more boisterous debate held the night before, in the presence of a lively crowd at the Hooks Main Library.

That one had been between Whalum and Barbara Prescott, the former Memphis school board member who had most recently headed up the Transition Planning Commission created by the legislature to advise on city-county school merger. And, however different in kind (and volume) it might have been from the Rotary debate, the problem discussed was essentially the same — that of costs versus value received.

There were — and are —numerous ways of carrying out such an evaluation, and essentially the city-wide debate, which has heated up seriously within the last two weeks, has taken place between those poles. The Memphians who go to the polls on Thursday, adding their judgment to those already cast by early voters, will determine to which side of the equation the pendulum tilts.