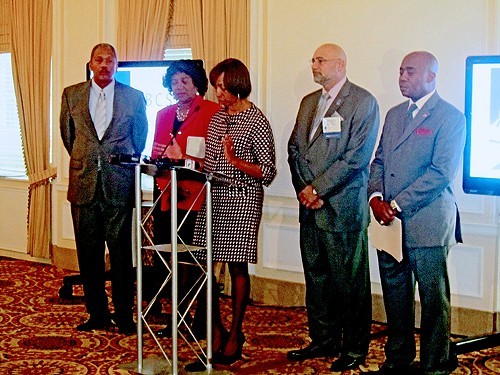 The 37th annual meeting of the National Black Caucus of State Legislators, which began on Wednesday at The Peabody, will continue through the weekend. A highlight Friday morning is the Lois DeBerry Prayer Breakfast, named for the revered and respected state Representative and former state House Speaker Lois DeBerry of Memphis, who died this summer after a long illness.

The closing plenary session on Saturday, “Galvanizing a State Agenda on Civil Rights,” will be moderated by TV One host Roland Martin.

What follows is a partial description of events, courtesy of the Carter Malone Agency.

WHAT: The National Black Caucus of State Legislators (NBCSL) is holding its 37th Annual
Legislative Conference in Memphis, TN. A primary focus will be the discussion and ratification of policy issues submitted by members of the organization with collaboration by community stakeholders. Those policies will be the foundation for state and federal legislation, the NBCSL policy platform for 2014, and collaboration with community- based organizations.

About the National Black Caucus of State Legislators
The National Black Caucus of State Legislators (NBCSL) is a membership association representing more than 600 African-American state legislators hailing from 45 states, the District of Columbia and the Virgin Islands. NBCSL members represent more than 50 million Americans of various racial backgrounds. NBCSL monitors federal and state activity and provides this information to its members through policy symposiums and conferences. Each year, NBCSL members pass policy resolutions that directly impact federal and state policy. The organization focuses on issues that directly impact U.S. domestic policy and is committed to policies that positively affect all Americans. Learn more at www.nbcsl.org.