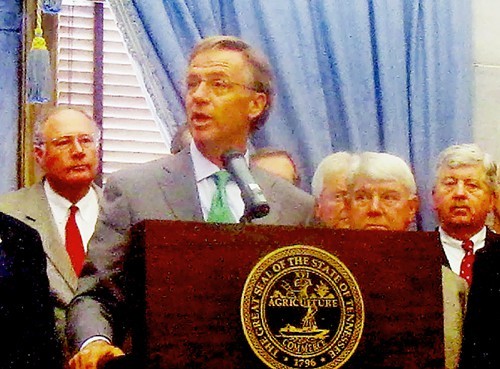 NASHVILLE — As the Tennessee General Assembly ended its first week of the newly convened 2014 session last Thursday, Governor Bill Haslam called a press conference to announce a proposal for strengthening controls on sale of pseudoephedrine so as to control the spread of methamphetamine production in Tennessee.

Haslam would later answer questions about other statewide issues, some of which Lt. Governor Ron Ramsey, the speaker of the state Senate, would also address later on in Ramsey’s weekly post-session meeting with reporters.

At his press conference, the governor announced a plan would restrict an individual’s purchase of pseudoephedrine, a widely used decongestant cold remedy, but one also utilized as a key ingredient by illegal meth producers, to 2.4 grams each month. Pharmacists would be allowed, on their own judgment, to dispense another 2.4 grams. Beyond those amounts, totaling a 20-day supply for normal medicinal use, purchasers would require a doctor’s prescription.

Doug Varney, Commissioner of the state Department of Mental Health and Substance Abuse Services, said some 650,000 Tennesseans are buying illegal meth each, and Mark Gwyn, director of the Tennessee Bureau of Investigation, made a point of noting that the “scourge” of meth abuse, which began in East Tennessee, had mushroomed enormously in West Tennessee, particularly in Memphis.
Following the press conference, Haslam fielded reporters’ questions on other topics, especially on (1) the likelihood, increasingly remote-looking, of the state’s receiving a federal waiver for additional Medicaid funding under the Affordable Care Act, and on (2) the governor’s plans for a voucher program, allowing the use of public education funding in private schools.

Medicaid/TennCare expansion: While in Memphis the week before for the ceremonial grand opening of the Electrolux plant on Presidents’ Island, Haslam had been asked what prospects for the federal government’s granting a waiver on the basis of the governor’s proposal of what he calls “the Tennessee Plan,” which would route federal funds through private-sector administrators.

In Memphis, Haslam had said he had just engaged in fresh conversations with Health and Human Services Secretary Kathleen Sebelius and that an early visit to Tennessee from representatives of the Centers for Medicare and Medicaid Services was expected.

Asked the status of that, Haslam answered,

“That was Secretary Sebelius’ suggestion when she and I talked on the p hone. She said, ‘Let me figure out a time for our folks to get there.’ I think she’s working on that. In the meantime, we’re continuing, [director] Darin Gordon and the TennCare folks are continuing now with discussions with CMS [sic]. I don’t know the actual date of their visit has been set or not. Again, Secretary Sebelius said, ‘I’ll set up a time, and we’ll make that work.’

“Until CMS comes back and says, ‘Here’s what we can do,’ there’s not a plan to debate. We don’t know what it will look like until they say, ‘Yes, we’ll let you do that, we won’t let you do that.’ Our message to them has always been, we want to have something that bends the cost curve on health care costs. Medicaid/TennCare costs take up so much of our budget, it’s increasing.

“At one point, it had got up to be about 35 percent of our budget. When Governor [Phil] Bredesen cut the rolls, it went down to 25 percent. Well, gradual creep gets it back up to 35 percent again. We have to have something that addresses the cost aspect of that. And we’re in the middle of having discussions with CMS to see if we can have something that addresses, like I said, real meaningful both user engagement and payer engagement in the system.”

Asked how much money the state could make available in long-term matching funds, Haslam responded,

“The current plan, if you expand Medicaid, anticipates the state putting in a lot of money over time. We want to have a system that actually drives down the overall costs. And I think we can do that. I don’t think anybody thinks our current Medicaid system works well. Before we expand a system that doesn’t work well, let’s see if we can make it work better.

Asked if the bill by state Senator Brian Kelsey (R-Germantown) that would block Medicaid expansion should be passed, Haslam said, “I don’t think so.” He said both “take it as it is” and “block it” are “short-sighted approaches.” He said, “We’re looking for a bill that provides a better plan concerning health care for Tennessee. To pass a bill that blocks that option, I think, is short-sighted for the state.”

Apropos long-term changes in how medical services are dispensed and paid for, the governor said,

On Vouchers: Haslam was also asked what the outlook on voucher legislation was. In the 2013 legislative session, he proposed a pilot program of sorts, with state voucher funding made available to 5,000 low-income students in failing schools. Senator Kelsey proposed a more expansive program with much higher levels of involvement. Faced with Kelsey’s insistence on modifying his pilot bill, the governor yanked it in the last week of the session, and no legislation was passed.

“I think what we’re going to do on vouchers, is we’re going to engage the legislature right where we left off with them with the bill that we had. We strongly favor an approach that addresses the needs of children in the highest-need circumstances, low-income kids in low-performing schools. We also want to do something that can get passed.

“It’s important for us to have a measured approach...We want an approach that says, let’s see what the impact is, both on students and on districts and on overall educational progress in Tennessee….I think we’re going to reengage with the bill we’ve had out there.

“If we have something that addresses the needs of low-income kids in low-performing schools and something that can get passed, we’re going to have that conversation. We don’t have to have an expansive plan that I don’t think Tennessee is ready for right now.”

Asked if he’d had any conversations with Kelsey about voucher legislation, Haslam said, “We haven’t this year. No.”

At a later press availability of his own, Lt. Gov. Ramsey endorsed a more ambitious voucher concept, similar to Kelsey’s in which the governor’s initial allotment of 5,000 vouchers for low-income students might be stretched to 10,000, with any unspoken-for vouchers being made available, “first come, first served” to whomever applied for them, “regardless of income.”

Gun issues dominated Ramsey’s availability. He began his session with reporters by handing out copies of a legal opinion he’d commissioned from the Legislature's Office of Legal Services contradicting an earlier opinion from state Attorney General Robert Cooper. The attorney general had declared that the guns-in-parking lots bill passed by the legislature last year did not prevent employers in Tennessee, an “at will” state, from firing employees who kept weapons in their locked cars.

The opinion released by Ramsey maintains: that the new law does indeed protect employees from being fired for availing themselves of its provision for keeping concealed weapons locked in their cars.

Ramsey proclaimed himself skeptical of the actual authority of the AG:

“It’s been tradition that the Attorney General’s opinion is law in this state. It’s not. He’s just one attorney. I respect him and think he does a great job….But who would know better [about the law] than the people who wrote the law and sat through every debate?”

“Why did I do this, [i.e,] send the bill to Legal Services for a fresh analysis? I want to be through with this. We passed a good bill….I wanted to stop talking about guns last year, but the Attorney General kept that from happening. He was the only person I know of who took that stance!”

Ramsey said he was opposed, however, to a proposed constitutional amendment, soon to be voted on by the state Senate, that the Tennessee Attorney General, currently appointed by the state Supreme Court, be subject to popular election. The Lt. Governor said he was not for the proposed amendment, that for the state’s chief legal officer to have to raise money for electioneering would “taint” the office. He did, however, endorse, a bill by state Senator Mark Green (R-Clarksville) that would have the legislature appoint the AG.

Further on gun legislation: Ramsey said he was opposed to any rewriting of the guns-in-parking lots bill so as to further spell out employees’ rights. Such a rewrite is “not needed,” he said, and could give an employer “legal ammunition” to litigate it in court.

The Senate speaker said he would vote for revision of a 2009 gun bill so as to remove provisions of that bill allowing local jurisdictions the option to ban guns in parks. “Local jurisdictions are a political subdivision of the state,” Ramsey said. “When it comes to something like the Second Amendment,” he would be in favor of a “blanket statewide law.”

Ramsey said, however, that he had “never been for Constitutional Carry,” the name given proposed legislation like that adopted last year in Mississippi, allowing the free and unfettered right of citizens to possess and carry concealed weapons without need of permits. He said that such requirements for permits and associated training in firearms use were, along with requirements for background checks by gun-sellers were useful. ““It’s a little bit of trouble to get a gun permit, and it should be….I like he system we have now.”

Asked for his attitude toward a “charter-authorizer” bill favored by his opposite number, state House Speaker Beth Harwell (R-Nashville) that would empower the state Board of Education to act directly on charter school applications, bypassing and transcending the authority of local school boards, Ramsey said he had “no objection” to the bill, which he had blocked in the Senate last year in retaliation for the House’s rejection of his own proposal to revamp the state’s judicial districts.

The “family squabble,” putting himself against Harwell and his chamber against hers, was done with, Ramsey said, pronouncing relations between himself and the House Speaker to be “fine.” As for his blocked judicial redistricting bill, which would have taken into account population patterns that have developed since the last redistricting in in 1984, it was too late to revise the measure before this year’s judicial elections, but “sometime in the next eight years,” he said, the problem should be dealt with.