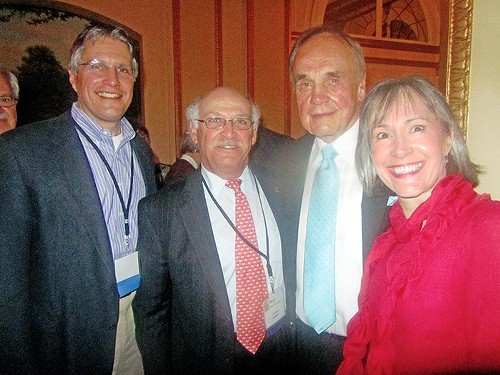 The Memphis Rotary Club is playing host this week to a "big club" conference of fellow
Rotary clubs from throughout the nation. Representatives of major urban areas, north, south, east, and west were on hand beginning Sunday night, with a keynote address by sports broadcasting legend Dick Enberg.

Enberg, whose career of 50-plus years has allowed him to cover major sporting events of various kinds — football, baseball, tennis, what-have-you — for several national networks, regaled the Rotarians with first-hand anecdotes about such legendary figures as Ted Williams, John McEnroe, and John Wooden, citing the renowned late UCLA basketball mentor in particular as a role model in line with the official Rotary slogan of "Service above Self."

The conference which has involved excursions by visiting Rotarians to St. Jude Children's Research Hospital, Beale Street, and other local landmarks, as well as an in-depth look at the local club's "Stop Hunger Now" project in action, also includes a Tuesday luncheon in The Peabody's Continental Ballroom.

Scheduled speaker for the luncheon was Rebecca Skloot, author of The Immortal Life of Henrietta Lacks, concerning the life and death of the woman whose preserved cancer cells continue to loom large in medical experimentation.

The conference will formally end with a breakfast at The Peabody on Wednesday morning.