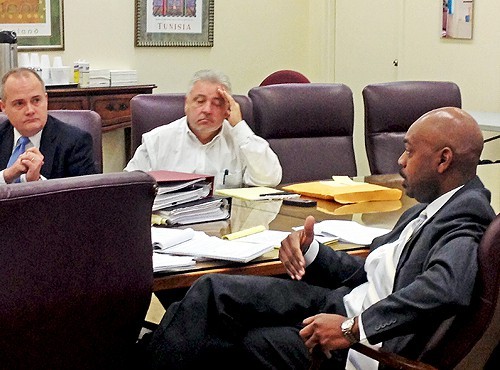 On Thursday, some nine months after Shelby County Commissioner Terry Roland initiated ethics-violation charges against colleague Sidney Chism, in the middle of a battle over the county budget, a three-member panel of the county Ethics Commission delivered a verdict of sorts.

By a vote of 2-1, the panel dismissed the charges, which essentially were that Chism had violated both county and state ethics strictures governing conflicts of interest by voting for appropriations benefiting the Horn Lake Road Day Care Center, owned by Chism and his wife, by failing to disclose his interest in the center, and by gaining direct benefit from the funding.

Chism himself was not present at the hearing, which lasted all day and included some dramatic one-on-one confrontations and vigorous interrogations by the two participating attorneys, Ricky Wilkins for Chism and Brian Faughnan, a special attorney operating on behalf of Roland and, formally, for county government.

At issue were several votes participated in by Chism since the Commission’s adoption of a revised ethics code in 2009. Some of the votes involved direct allocation of Head Start pass-through monies destined for the Horn Lake and other day-care centers, and other votes involved Chism’s joining other commissioners in voting for annual budgets that included such wraparound funding for nutritional and medical services.

In the end, Judge James Allen, the panel chairman, and former Probate Judge Donn Southern voted for dismissal, indicating their belief (1)that Chism and his wife had not received direct benefits from the wraparound funding; and (2).that state law — which posits a wider definition of conflict-of-interest, including indirect benefit as well as direct — did not apply to the case at hand. A third panelist, layperson Susan Moresi, voted to sustain the charges.

The bottom line is that, while documents, transcripts, and other evidence pertaining to the case will be passed on to the full 12-member commission, the panel’s vote for dismissal makes that action more or less pro forma. The charges are dismissed.

Among the witnesses heard from were Roland; Dottie Jones, the county’s community development officer; John Lovelace, executive director of Shelby County Head Start, who was not present but whose deposition was offered in evidence; and County Commissioner Steve Mulroy, a colleague of both Chism and Roland. 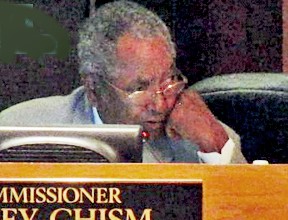 The thrust of what Jones and Lovelace had to say was that the wraparound funds conferred no direct benefit on the Chisms, that they went directly to children in the form of services, and that they could not be construed as giving the Chisms an unfair advantage over other day-care centers, inasmuch as it wasn’t parents but Head Start itself that made assignments of children to this or that center.

By contrast, Roland and Faughnan argued that the case was about, in the attorney’s words, “personal responsibility” and whether public officials could be “held to the highest ethical standards or not.” At the very least, Faugnan said, Chism should have made disclosures of his involvement with the day center before casting his votes on the wraparound funding.

Wilkins said that Chism and his wife had no financial interest in the outcome of the funding votes, “never had and never will,” that “not one dime” had accrued to either of them as profit, and that the burden of proof was on the county (i.e., special counsel Faughnan) to prove otherwise.

Faughnan did his best, as did Roland, who testified that he had no malice against Chism, whom he considered a friend, but that he had been informed via an anonymous letter about his colleague’s connections to the Horn Lake day center and considered it his duty to issue the ethics challenge. He professed to have no faith in what he’d been told by Jones (essentially the same as she told the panel on Thursday) denyng any direct profiting on the Chisms’ part.

Roland accused Jones of “lying” either to him or to Harvey Kennedy, chief aide to County Mayor Mark Luttrell, to whom, according to Roland, she’d given a different, less generous, interpretation of Chism’s actions.

The decisive testimony on Thursday may have been that of Mulroy, who offered strong testimony to the effect that commissioners, in the debate on developing a new ethics code in 2009,had been overwhelmingly against including language like that in existing state codes that proscribed “indirect” benefits to public officials.

Asked if he thought Roland’s charges had been “political” in motivation, Mulroy professed not to be able to divine his colleague’s mind but cited a lengthy list of legal or quasi-legal charges made by Roland over the years against fellow commissioners, usually in the course of debating political differences.

Whether political, legal, or some mixture of the two motives, Roland’s charges against fellow commissioner Chism are done with now, though it is hard to imagine that the disputatious spirit behind them — or a determination to wreak reform, as Roland himself sees it — will be subsiding anytime soon


UPDATE: Apropos the matter of Roland’s determination to persist and whether or not his charges against Chrism are “done with,” Roland on Friday released the text of a letter (see following) to assistant county attorney Damon Griffin asking advice on how to renew his legal challenge:

Please provide me with the procedure to appeal the Shelby County Ethic’s [sic] Commission ruling up to the State Ethic’s Commission. I would also like to have a copy of the transcript from yesterday’s Ethic’s [sic] Hearing – especially Commissioner Mulroy’s testimony.

Please be advised that it “appears” the Shelby County Ethic’s Ordinance does not comply with State Law. IF Commissioner Steve Mulroy’s opinion/testimony yesterday is correct then what exactly are the ramifications for Shelby County Government to be in violation of State Ethic’s Law?