It's Vote Time for Koozer-Kuhn on Capitol Hill

Last week's positive response from legislators gratified medical-marijuana supporters, who are hopeful but cautious about what comes next. 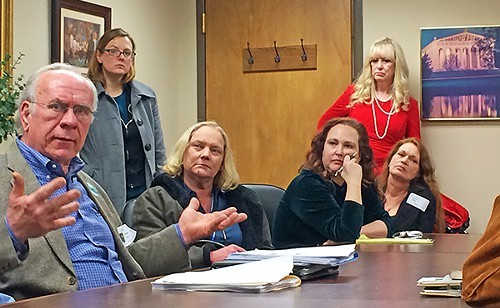 UPDATE: HB 1385 was not heard on Tuesday in Health subcommittee but was remanded to "last calendar." More information on Wednesday.

NASHVILLE — On Tuesday morning, when the General Assembly’s House Health subcommittee votes on HB 1385 by Rep. Sherry Jones (D-Nashville), a.k.a., the Koozer-Kuhn bill, the hopes of medical marijuana supporters in Tennessee could be brought crashing down to earth, but a hearing before the full Health committee last week generated an unexpected high.

After an hour’s worth of testimony on Wednesday from patients who testified compellingly that their conditions — ranging from cancer to epilepsy to cerebral palsy — could only be alleviated by legalized access to marijuana, even the subcommittee’s most conservative members seemed, if not convinced, then at least impressed and respectful.

At the conclusion of the hearing, not only Committee chairman Bob Ramsey (R-Maryville), whose deportment had been kindly and solicitous throughout, but other Republicans — vice chair Ryan Williams of Cookeville, Timothy Hill of Blountville, and Tim Wirgau of Buchanan, joined Democrat Darren Jernigan of Old Hickory, an overt backer of the bill, in expressing appreciation for what Hill called “sharing your heart.”

Bernie Ellis, the longtime progressive activist from Nashville who organized the occasion, met with his fellow presenters in a Legislative Plaza caucus room afterward for what was a combination celebration and press conference. But both Ellis, who said he had never dreamed of getting so prolonged and attentive a hearing on the hill, and Rep. Jones cautioned the happy group of patients, family, and supporters not to become too heady, that this week’s follow-up would be the real test.

As both noted, only the committee’s Democrats and an unknown number of Republicans could be counted on to vote for the bill, and converting the GOP majority was going to be a daunting task, no matter how friendly the Republican members had seemed on Wednesday. As Jones put it, don’t take anybody for granted, “even if they kiss you on the lips.”

In her introductory remarks before the Health Committee on Wednesday, Jones had stressed the naturally occurring benefits of marijuana. “The only difference between this plant and other plants is that it has some medical benefits to it, proven medical benefits. that can be traced back to 5000 B.C.”

She noted that 21 states either had legalized medical marijuana or had legislation under way. Koozer-Kuhn was a “very conservative program with strict oversight,” she said, adding that cultivation of marijuana could “make a lot of money for Tennessee,” replacing crops like tobacco that have fallen off.

Polls showed that only 18 percent of Tennesseans disapproved of the concept of medical marijuana, she said. “Nobody dies from using marijuana, nobody ever has.”

Ellis, who served as principal consultant on the bill, pointed out that Koozer-Kuhn met Department of Justice standards for medical marijuana legislation “to the letter,” and repeated that the bill established a “safe access program,” employed “rigorous and reliable standards,” and would restrict use of marijuana “only for serious conditions, well documented.”

Persuasive as both Jones and Ellis were, however, it was the patients and their family members who really had the impact.

Among them were Seth Green, a sufferer from both cerebral palsy and MS, who said marijuana had alleviated both the intensity and the frequency of his seizures, which his prescribed pharmacology, rife with unpleasant side effects, could not do. There was Penn Mattison, father of two-year-old Millie, whose case was described so well by the Flyer’s Alexandra Pusateri (“In the Weeds,” February 6).

Millie, a victim of infantile spasms that her father said were constant and “intractable,” had been on eight different medications, costing over $60,000 a month, with side effects ranging from blindness to bone deterioration. Moreover, “they didn’t work at all.” But a move to Colorado, with its newly legalized marijuana, did.

There was Kathy Walker of Fayetteville, a cancer sufferer who drew heavy applause from the packed hearing room when she observed, “I can’t understand why cancer patients can be prescribed morphine but not marijuana.”

Walker had been so damaged by surgery, radiation, and chemotherapy that she had virtually permanent nausea and was unable to eat. “A few puffs,” she said relieved the nausea and increased her appetite.

Green, too, had made mention of the phenomenon well known to recreational users as “the munchies.”

And Ellis, as well, referred to that aspect of marijuana use later at the press conference/celebration:

“The side effects,” he mused. “I think we are going to continue to say there are side effects, and they’re almost all virtually positive side effects. I joke, you know, that one thing that’s common among medical cannabis users is that they eat too much, talk too much, and laugh too much, and none of those are a problem for a seriously ill person. They’re all positive."