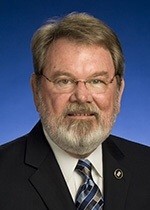 NASHVILLE — The state Department of Safety and Homeland Security has advised that a “fiscal note” in the amount of at least $100,000 -- to cover the costs of re-writing existing concealed-carry permits -- must be included in the open-carry gun bill (SB2424;HB2409) that passed the state Senate on Tuesday by an overwhelming vote of 25-2.

And, even though the Senate version's sponsor, Mae Beavers (R-Mt. Juliet) managed to secure an amendment striking the fiscal-note requirement before the vote in that chamber, the House version still contains the provision, and indications are that it will remain on the bill.

That means, according to a key Republican member of the House Finance, Ways and Means Committee, which will take up the bill on Monday, that the bill, which would allow all Tennesseans to carry weapons on their persons so long as they aren't concealed, is probably doomed.

“The budget we’re working with makes no allowance for sums like that,” said veteran state Rep. Steve McDaniel (R- Parker’s Crossroads), who doubles as Deputy Speaker of the House.

McDaniel said he doubted that the bill would ever reach the floor for a House vote as the legislature steams toward a conclusion early next week. “It’ll never get out of House Finance," predicted McDaniel, who said emphatically that he was personally disinclined to vote for the measure.

“Hell, no!” said McDaniel, who -- clearly relating his statement to the home base of his questioner -- said that, if the measure passed, “Every gang-banger in Memphis will end up packing. Can you imagine?”