A meeting of the County Commission resolves the capital spending issue for schools but dissolves in chaos. 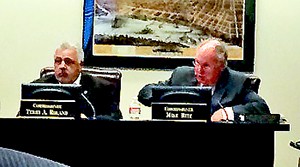 The Monday meeting of the Shelby County Commission may have begun tamely enough — with the latest intonement by Commission chair James Harvey of what he calls the “chairman’s inspiration” (an uplifting piece of quoted boilerplate, this time by one Mary Curry), followed by an unusually lengthy presentation to Dr. Carnita Atwater, a deserving citizen, by Commissioner Henri Brooks, but it ended some three hours later in a catastrophic free fall.

In between there were three points of contention, the first of which concerned a Commission appropriation of $52.2 million for capital improvements in the schools of Shelby County — meaning the new municipal school systems in the county as well as Shelby County Schools proper.

The sum was $4.8 million greater than a preliminary figure agreed upon during committee sessions last Wednesday, and the difference was in an add-on in that amount, earmarked for the suburban schools, in a resolution sponsored by Commissioner Mike Ritz

Ritz’s proposal won out over a competitive proposal from Commissioner Heidi Shafer which would have allocated the same amount for the suburbs but would have trimmed capital spending elsewhere to keep the current fiscal-year total under a $50 million cap desired by Mayor Mark Luttrell.

Shafer had been one of the holdouts from last week’s consensus proposal for $47.4 million for SCS, which also had included $1.1 million for roofing the gym at Millington High School. That proposal, an alternative to a piecemeal approach to capital needs proposed by Luttrell, had been advanced by Commissioner Steve Mulroy, a recent mayoral candidate who was absent Monday. (The commissioner was on a post-election vacation that would include his receipt this week in New York of an “American Hero” award from the American Kidney Foundation in honor of his “altruistic” donation of a kidney last year.)

In essence, Ritz’s add-on this week brought about a gain of two Republican, suburban votes over last week — Mark Billingsley and Chris Thomas —but a loss of thee Democrats — Justin Ford, Harvey, and Sidney Chism. Chism’s explanation for the vote change was his feeling that if the suburban municipalities had insisted on having their own school systems they should be willing to foot the bill for them.

In a pivotal speech on behalf of the spending formula with the Ritz add-on, Millington Commissioner Terry Roland said, “We didn’t spend any money for schools for ten years. We’re talking about two million dollars. At the end of the day we can pass this. Everybody in Shelby County will be happy, okay?....We’re arguing over nothing. If you’re worried about the mayor vetoing it, I tell you, I’d hate for the mayor to veto this with the suburbs getting a little out of it. Okay? He won’t veto this.”

Ultimately, only Ford, Harvey, and Chism voted against the $52.2 million proposal. Shafer abstained.

The next controversy was over a resolution on the Commission’s “Consent Agenda,” regarding the expenditure of $1,700, 773.00 to replace a roof on a building in the county complex on Mullins Station Road.

The item was a carryover from a previous committee session in which questioning by Commissioners Brooks and Walter Bailey revealed that the construction firm on the project employed few, if any, blacks, but satisfied Equal Employment Opportunity Commission(EEOC) standards for minority employment by virtue of most of the employed construction workers’ being Hispanic.

Brooks and Bailey made the same objections to the project Monday, with Brooks pointing out differences in the minority status of Hispanics, who “asked to come here” and blacks, who didn’t and enduring “barbaric” treatment and had experienced “a pattern of intentional discrimination.”

But, after much to and fro, this resolution, too, would pass.

The final controversy over the day arose over the sale of a delinquent tax parcel, a county-owned property in North Memphis currently under the management of a community non-profit group but one with an accumulated tax bill of several hundred thousand dollars that had caused it, amid bureaucratic confusion over prospective City of Memphis attempts to acquire it, it to be purchased by an out-of-county blind trust.

After yet another prolonged to-and-fro debate, the Commission would approve the sale. But, in the process, Chairman Harvey had overlooked a request-to-speak card tendered by a citizen, Dorothy Townsel, involved with the non-profit organization’s management. She was allowed to make her intended remarks about the issue, but since the Commission’s vote had already been recorded, what she had to say could have no effect on the resolution of the matter.

Decrying what she said was the injustice of that, Townsel made an impassioned defense of the non-profit’s management, spoke of how drug peddlers and prostitutes had been chased from the premises and how the building, which functions as a a rental facility, had become “the heart of the community, a community within the community .”

Effectively delivered, her speech became even more so when she broke down emotionally midway, bemoaning her lost chance to affect deliberations.

“How come I couldn’t speak before the vote was taken? Y’all represent me, too! Me, too!” she cried out. As for the facility, “it’s not an investment, it’s a passion, and it’s thriving.”

Upon the conclusion of Townsel’s remarks, the remaining members of the Commission (several had left immediately on conclusion of the vote) appeared shaken, and there were abortive discussions about the possibility of reconsidering the vote, but a quorum could not be convened to do so, and the meeting was adjourned.

Commissioner Shafer, who had been in a back office on the telephone about a pending Commission matter, returned after the adjournment and, upon learning of subsequent developments, began a lengthy conversation with Townsel and Commissioner Brooks, saying afterward that efforts would be made to see if the Commission might reconsider the matter.