Amid skepticism of Election Commission bona fides, primary board members vote to look into possible numerical tie in Milton-Jones contest. 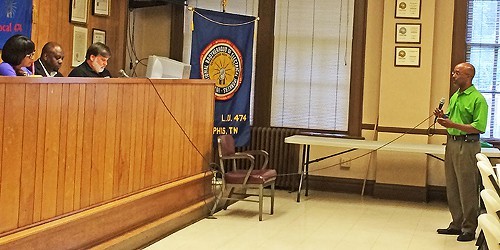 The Complaint Desk at the Shelby County Election Commission, which has worked overtime the last few years, needs to make time for one more customer — the Shelby County Primary Board, which met on Friday evening to hear an appeal by Martavius Jones regarding a possible miscount in what was reported as a losing Democratic primary race for the District 10 seat on the Shelby County Commission.

Afterward, the Board unanimously adopted a motion by member Javier Balley to request of the Election Commission copies of all tabulation tapes from the district’s voting machines; copies of all records from each precinct; and copies of all provisional ballots used in the election, as well as access to the originals.

Provisional ballots are paper ballots given voters who show up to vote without proper identifying materials and are held in reserve for post-election evaluation as to their authenticity and as additional evidence in case of disputed election results.

“This is one time they could be tiebreakers,” said Board member Paul Shafer afterwards, “because it looks like we might have a tie.”

Jones had presented a case that unofficial returns reported by SCEC on election night, May 6, showing that he lost the Democratic nomination to Reginald Milton by 26 votes were in error, and produced photostatted vote tallies from each precinct in the district that appeared to show himself and Milton to be exactly tied at 2,045 votes apiece, with third-place finisher Jake Brown coming in at 707 votes.

Jones had presented his own case and originally asked that the Board seek a recount before the Election Commission’s planned certification of election results next Wednesday, May 21.

MIlton chose to be represented at the hearing by lawyer Jeff Feibleman, who made the case that the section of the election code governing contested outcomes does not allow for a recount “until there is a count,” and that no official count would be established until certification of the results.

The best that could be done meanwhile, said Feibleman, was to ask that the Election Commission “take a closer look” at the results in the District 10 race.

After some exploratory conversation back and forth between Feibleman and Board members, eventually Bailey cited a section of the election code that, he said permitted the Primary Board to make the request for materials that he would eventually put into the prevailing motion. Feibleman professed uncertainty as to whether such a request would be regarded as valid.

With the requested records in hand, Bailey said, “We could do our own recount,” and the rest of the Board accepted his reasoning when time came to vote on his motion.

Asked for his own opinion, Milton said resignedly that all the wanted was fair and reliable election results. He did express a concern that prolonged uncertainty about the outcome of the Democratic primary could prejudice the party nominee’s chances against a “very aggressive” Republican nominee, Geoff Diaz.

A leitmotif at the hearing among Democratic Primary Board members was skepticism about the bona fides of the Election Commission, given the fact of numerous election glitches over the past few years, and of the Commission’s attorney, John Ryder, who simultaneously serves as general counsel of the Republican National Committee.

“I just don’t trust them,” said member Sondra Becton, a veteran of at least two challenged elections. Nobody disagreed..