Judge Bill Anderson, Jr., recuses himself, necessitating appointment of a special judge to hear the case next month; incident further complicates election picture for Brooks, others. 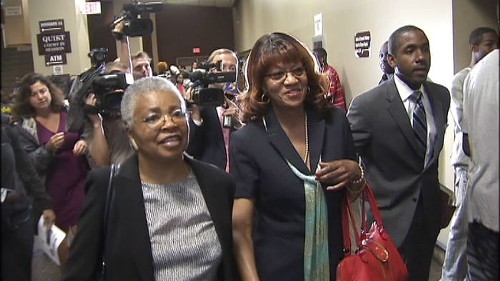 Anderson recused himself from the case, however — presumably because both he and Brooks are associated with county government, creating a technical conflict. A special judge will be appointed to hear the case.

The charge against Brooks stems from an incident Thursday morning in the parking lot of Methodist Hospital Central, where Brooks works. In the aftermath of an argument with another driver over an available parking space, Brooks was identified by witnesses as the instigator, according to the official police report.

The encounter became physical, according to the report, when Brooks grabbed at the cell phone of the other driver, identified as Liese Nichols, bruising her in the process, and subsequently emptying a bottle of water at Nichols.

On a cell-phone video made by one of the eyewitnesses of the incident, Nichols is heard talking to someone on her own cellphone, explaining what happened this way, in part: "She got into me for being, she goes, do you think you're white or something? And my jaw dropped because I'm mixed, and I'm like, are you kidding me?"

Nichols told police that Brooks had moved without warning into the space that she, Nichols, was about to park in, forcing her car off a curb and causing her bumper to collide with a tree.

Brooks declined to speak to media Friday after court, but her attorney, Andre Wharton, said it was uncertain if an actual crime had been committed, or, if so, whether the right person was charged. He indicated that Brooks might file charges against Nichols.

This newest imbroglio involving Brooks further complicates her current candidacy as Democratic nominee for Juvenile Court Judge in the county election ending August 7. It also could impact the fortunes of other members of the Democratic countywide slate.

Brooks attracted considerable notoriety last month when she upbraided an Hispanic witness before the Commission in a manner which many deemed offensive, even racist.

Despite indications at the time that either the Commission itself or the Shelby County Democratic Party, or both, might consider some kind of formal reprimand of Brooks, no action was taken.