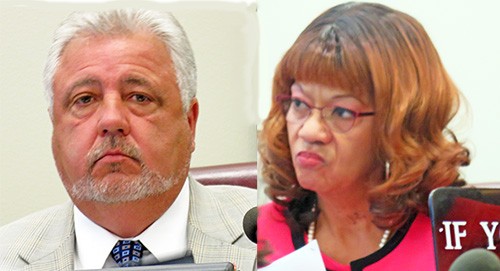 The Henri Brooks meltdown — really, there’s no better word for it — accelerated over the weekend and reached a crisis point on Monday afternoon that could end up divesting the Juvenile Court clerk candidate of her seat on the Shelby County Commission. And in very short order.

Brooks’ once promising electoral situation began deteriorating last month when her bizarre behavior toward an Hispanic witness and two colleagues at a Commission meeting earned her accusations of racism.

She next earned negative attention when she was involved Thursday morning in an altercation with another driver over a parking space in a parking lot at Methodist Hospital Central, where Brooks works. Identified by witnesses as the instigator, Brooks allegedly used racial slurs and abused the woman by bruising her and throwing water at her. That episode earned her an assault charge and a July court date.

The latest issue arose when a reporter for WPTY-TV, Channel 24, went by Brooks’ listed home address on Crump Avenue to get a reaction from her on the previous incident and was told by neighbors that Brooks had never lived at the address, which was well within the constituent area served by her District 2 Position 2 Commission seat.

It was later discovered that Brooks actually lives on a cove in Cordova, which is many miles distant from the district formally served by the Commissioner, who regards herself as a spokesperson for African Americans and justifies her often abrasive attitude on the Commission by saying she is looking out for her “constituents” in District 2.

The weekend buzz caused by this discovery was enormously amplified Monday when, during crucial votes by Commissioners on two competing tax-rate resolutions, Commissioner Terry Roland cited a provision of the county charter which apparently mandates that any commissioner moving out of district that he or she was elected from or who cannot be proved to live there must vacate the seat.

Unlike other verbal broadsides fired by Roland, including a couple after the parking lot incident that challenged Democrats to do something about Brooks, this one was stated almost matter-of-factly, if firmly, in a non-contentious manner, and there seemed to be no real disagreement with it on the Commission.

Indeed, as the meeting meandered to a close, after indecisive votes on several issues, including the county’s tax rate for 2014-15, that must be resolved by the end of the fiscal year, it was not Roland but Commissioner Mike Ritz who pressed for a special called meeting to deal with the matter before the next regular Commission meeting of July7, which straddles the change of fiscal years.

Observing that neither of two tallies for competing tax-rate solutions, one by Heidi Shafer, another by Steve Mulroy, had achieved the necessary majority on the second reading for each, Ritz said that, without 13 valid votes on the Commission, “I don’t think we can get a tax rate.”

The Commission had already voted for a called meeting on January 26 to deal with several other unresolved issues, and when County Attorney Marcy Ingram confirmed that a failure to vote a definite tax rate by July 7 could endanger the county’s eligibility for federal funding, the Commission voted to add the Brooks residence question to the special-meeting agenda on June 26, so as to advertise a Commission vacancy, if need be, and elect a valid 13th member before the July 7 meeting.

Asked afterward if he thought that various past Commission votes could be invalidated by Brooks’ failure to maintain a residence in her district, a state of affairs which has apparently existed for the almost eight years she has held her seat, Roland said that might be the case but said he doubted the Commission would risk chaos by examining each and every instance where Brooks’ vote might directly have affected the outcome.