The late Tennessee eminence played a major role in the histories of his state and nation. 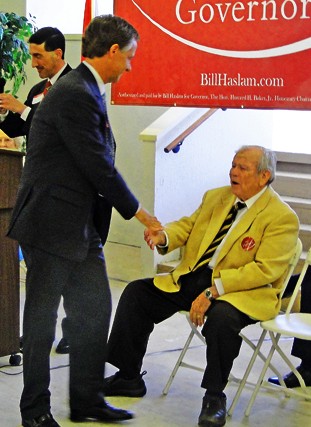 In the first blush of Thursday’s sad news about the death of Howard Baker at age 88, one utterance that is indelibly identified with the late Tennessee eminence got almost universal play in the media: “What did the President know, and when did he know it?”

That question, asked by Baker early on in the 1973 Senate Watergate hearings which Republican Baker co-chaired with venerable Democrat Sam Ervin, came to sum up the whole inquiry, and what is often overlooked is just how perfectly it hits the political and historical middle.

Baker, a GOP loyalist, initially phrased the line as a possible means of shielding Richard Nixon, whose knowledge of the sordid Watergate burglary at the Democratic National Committee’s offices it presumed to be almost as ex post facto as our own. But the evidence quickly began to indicate foreknowledge of some sort on the President’s part, and the rest, as they say, is history.

As the answer to his rhetorical question became ever clearer, Baker did not shy away from following it down the road to the inevitable conclusion. He is incorrectly remembered in most accounts as having been one of the President’s pursuers— and that sense, among Nixon’s diehard defenders, may have been the one most significant factor that doomed Baker’s own presidential ambitions — but he was really just a realist about the situation. And, if you will, a patriot.

It was appropriate in any number of ways — the standpoints of bipartisanship and national unity, among them — that Fred Thompson, the Baker hire who was then making his first appearance on the national scene as counsel for the Watergate committee’s Republicans, was the one allowed to ask the fateful question about a possible White House taping system of Nixon aide Alexander Butterfield. And do not imagine that Baker’s role in that moment was passive or incidental.

That was certainly one Howard Baker — the honest questioner, the negotiator, open to compromise and common purpose. But there was another Howard Baker, too — the Republican team player who made his own contributions to the ideology of the Right.

“Cut their pay, and send them home” — That was another Baker coinage, directed at what he saw as a boondoggling, bureaucratic-minded, big-spending Democratic majority in the Congress of his day. And it was a line that, as much as any other, kindled the early fires of what would become the Tea Party.

That was Howard Baker on the national scene, a transitional figure of some importance — whose post-Senatorial service as a second-term Chief of Staff for Ronald Reagan, the man who had defeated Baker and others in the 1980 Republican primaries, helped rescue that Presidency from the Iran-Contra scandal and preserve the sheen of the Reagan era for posterity.

After that Baker victory — assisted in large measure by Memphis’ Lewis Donelson —there was no more use of the term “tantamount to victory” as a descriptor of statewide Democratic primaries. After him would come the ebb and flow — involving names like Winfield Dunn, Bill Brock, Lamar Alexander — that eventually became today’s Republican deluge statewide.

In recent times, many — including Baker mentor Donelson — have wondered out loud if Howard Baker could even get elected in today’s more zealously partisan political climate. The answer is, almost certainly, that he could. Like the current Tennessee governor, Bill Haslam, whose primary victory he assisted in 2010, Baker knew how to comfortably straddle “moderate” and conservative positions so as to advance ideological positions without alarming anybody.

He would do just fine.

Here are some of the ways others chose to remember him on Thursday:

Governor Bill Haslam: “Howard Baker made Tennesseans proud, and he taught me an important lesson when I worked for him 35 years ago. Anytime he was sitting across the desk from someone in disagreement, he told himself to keep in mind: You know — the other fellow might be right. Whether at home, in business or in politics, that is always good advice to consider.”

Senator Lamar Alexander: “Howard Baker was Tennessee’s favorite son, one of America’s finest leaders and for Honey and me an indispensable friend. He built our state’s two-party political system and inspired three generations to try to build a better state and country. It is difficult to express how much we honor his life and how much we will miss him.”

Senator Bob Corker: “Howard Baker was one of those people who had the unique ability to bring out the very best in those around him. He always put our country’s interests first, and lived a life of service that everyone in public office should aspire to emulate. I have cherished the privilege of being able to sit down and talk with Howard on many occasions, and I will always value his words of encouragement.”

Lt. Gov. Ron Ramsey: “Elected as the first Republican U.S. Senator since Reconstruction, Howard Baker served as a catalyst for the Republican revolution in Tennessee. No matter how high he rose as a leader of our nation and our party, he always stayed true to his strong roots in Scott County, Tennessee. A veteran, a patriot and a true statesman, his legacy will not be forgotten.”

Tennessee Republican Chairman Chris Devaney: “Howard Baker’s name is synonymous with ‘civility”…. His legacy will always be bigger than the Party. He was more than just a legend in Tennessee—he was a titan in American politics. Senator Baker will be missed.”