Defying a Thunderstorm, SCS Contenders Have a Forum

Spirited discussions take place among candidates for places on the Shelby County Schools board. 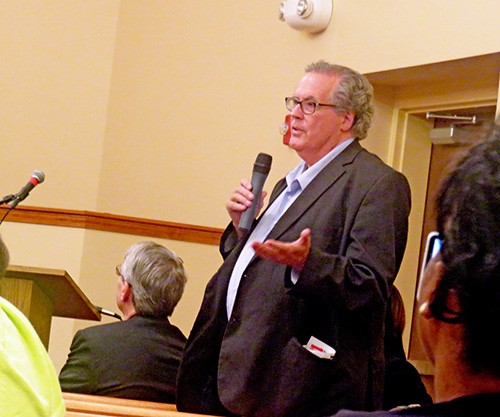 Less than a month away from August 7, when the final votes in Shelby County School Board races will be counted, the first fully separate cattle call for Board candidates took place Monday night at the First Baptist Church Broad under the joint sponsorship of several ad hoc education organizations.

Absent from the event, which took place during an off-and-on thunderstorm, were Teddy King and Anthony D. Lockhart in District 3; Scott McCormick in District 5; Jimmy L. Warren in District 6; and William E. Orgel in District 8.

The format called for each candidate to make an introductory statement and field one question from the moderator, Daarel Burnette II of the education periodical Chalkbeat Tennessee subbing for Keith Norman, the church pastor, who was absent. Though Burnette’s question was the same for each candidate, having to do with the candidate’s foremost objective as a prospective Board member, there was a fair amount of variety in the answers elicited, most of them sensible and well informed, concerning issues ranging from curriculum to parent-teacher relations.

A final round of questions was solicited from the audience, and it was in this round that a hint of candidate rivalry flared up. A woman sporting a T-Shirt conspicuously bearing the name of candidate Garner-Williams rose to ask how the Board might enlarge the number of out-sourced contracts awarded to minority (i.e., African-American) firms.

Garner-Williams made her answer, and then Caldwell took a turn. He was mid-way of his response, warming to his point, providing some background information about the School Board’s contracting policy, when the woman interrupted him.

Identifying herself as someone who had worked with the Mid-South Minority Business Council and was personally involved with expanding the opportunities for bidding on school contracts, she said, “Would you please address how you would make sure that this is done.”

Clearly miffed, Caldwell said, “That’s what I was starting to do,” adding as a sardonic aside before continuing, “I like that Freda Williams T-shirt.”

Caldwell and Garner-Williams squared off once before, it will be recalled, in 2012, when a 7-member Shelby County Schools board was being formed to replace a 23-member transitional city/county board, and Caldwell, now the incumbent, won that round. The two are now engaged in what amounts to a rematch.

Things proceeded somewhat more placidly among the trio of Austin, Kernell, and Norris in District 9, the only other district to have its full ensemble of competitors on hand Monday night.

Fielding a question about the desirability of separating “politics” from education, Kernell, a longtime state representative from southeast Memphis, was unique in embracing that inevitable pairing, saying that his experience and entrée with the state legislature could have positive results for his district and Shelby County Schools.

The 9-member SCS board being elected in this year’s School Board elections from the city of Memphis and unincorporated areas of Shelby County replaces the provisional 7-member board, which was elected from the whole of Shelby County.

One of the members of the outgoing 7-member board, David Reaves of Bartlett, was an interested spectator Monday night, chatting amiably before the event with several of his current Board colleagues who were taking part in the forum. Reaves is now a County Commissioner-elect and will be swapping chairs in September.