Current, Former Officials Back Wilkins; Cohen Responds with Own List

Supporrters of challenger include several who publicly backed incumbent congressman Cohen in prior elections; name of Fullilove challenged. 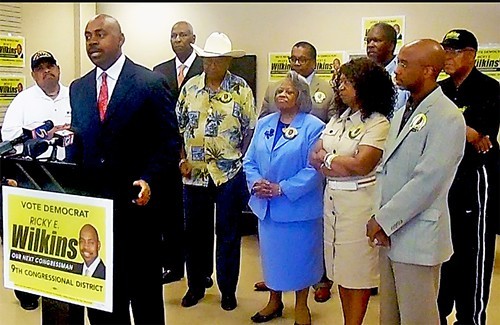 With a press conference Thursday unveiling some 21 endorsers from the ranks of current and former public officials, lawyer Ricky Wilkins upped his game in his effort to unseat 9th District congressman Steve Cohen in the August 7 Democratic primary.

Most of the 21 people listed on Wilkins endorsement list were present for the press conference, and several made verbal testimonials. In answer to a question, many of them confirmed that they had publicly endorsed Cohen, who was first elected in 2006, in some prior race.

(The Cohen campaign would express doubt about the validity of including the name of Fullilove, who was not present Thursday, and claimed her, in fact, as a Cohen endorser.)

All the names on the list are of African Americans. Asked about that and whether he could win the election and best represent the district without visible support of whites, who constitute a substantial minority in the 9th District, Wilkins noted that the list was limited to current or former office-holders and said he had several white supporters, who would come forth and be announced in due time.

In any case, the list announced Thursday was clearly an impressive one, and, while several of those who spoke on Wilkins’ behalf expressed concerns about the timeliness and extent of Cohen’s involvement in “local” issues — ranging from the 2010-13 controversy over the Memphis City Schools charter surrender and subsequent city/county school merger to the current debate over cuts in health-care benefits for city employees — there was an under-current of appreciation for Cohen’s past service, consistent with Wilkins’ often-used tagline, “If you liked Steve Cohen, you’ll love Ricky Wilkins.”

Or, as Wilkins also put it at Thursday’s press conference, “There is good, and there is better.” Referring to the acknowledged fact that many of his endorsers present on Thursday had previously been Cohen supporters, Wilkins said, “That corresponded to the facts of the time. We have some new facts now.”

One of the subjects discussed at the Wilkins press conference was the fact of President Barack Obama's having endorsed Cohen. Wilkins responded that "nobody has heard President Obama" announce such an endorsement, but acknowledged the likelihood of the congressman's having received a presidential endorsement,

Wilkins said it was not uncommon for sitting presidents to endorse sitting congressmen of their own parties and said, if elected, he had no doubt he, too, would receive such an endorsement from the president.

In fact, the president's name headed an extensive list released later Thursday by Cohen of his own endorsements.