Cohen, Malone, Ball among those taking stands this week; congressman picks up endorsements. 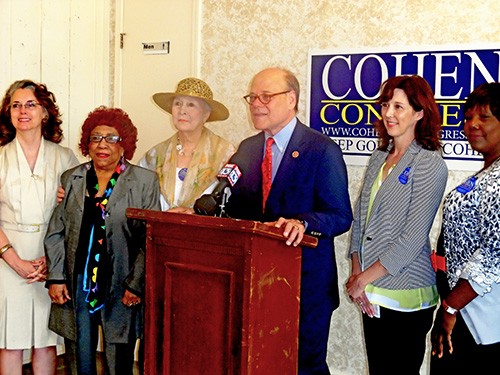 With two weeks to go in an August 7 election that includes a general election for county offices and a primary for state and federal positions, the role of women in society and the rights accorded to them are subjects that have begun looming large.

Highlighting a subject — women’s rights — that has historically been a major political focus of his, 9th District congressman Steve Cohen held a press conference at his Poplar Avenue headquarters on Monday in the company of several women who are both prominent activists in women’s issues and Cohen supporters.

“As women succeed, America succeeds,” said Cohen, who was praised by Ashley Coffield, CEO of Memphis Planned Parenthood, one of the attendees, as having an “impeccable record on reproductive health and rights issues” as “the only member of the Tennessee congressional \delegation to have a 100 percent scorecard” on issues essential to Planned Parenthood.

A day later, Deidre Malone, the Democratic nominee for Shelby County Mayor, was co-sponsor with Planned Parenthood and others, of a Kickoff Rally to oppose Constitutional Amendment 1 on the November statewide ballot, which would radically curtail the access to abortion rights in Tennessee.

"Across this country, women's reproductive rights are under attack; so we have to stand up and fight back," said Malone, a recent recipient of an endorsement from Emily's List, who promised to do what she could to "make sure that Shelby Countians vote no on this amendment."

"Sen. Lamar Alexander says he will vote yes for Amendment 1,I can tell you I will vote no. This issue is entirely too important for victims of rape, incest and when the life of the mother is in jeopardy. We don't want to change the constitution in the state of Tennessee when 71 percent of people polled are saying they don't want politicians dictating their healthcare. Voting no is the right thing to do."

Several of the aforementioned were also prominent at the Tuesday Kickoff Rally.