Adams or Ball: Tennessee Democrats Have a Viable Choice for U.S. Senate

Each promises a return to bedrock party values and an optimism about the fall campaign.

The term “embarrassment of riches” is not something that has been applied to the Democratic Party’s candidate lineup in a while — and definitely not in Tennessee, where the party has been brought to the edge of extinction.

But it actually applies to the circumstances of the Democrats’ U.S. Senate primary, featuring two candidates that almost nobody had even heard of a year ago. Not outside of Knoxville, anyhow, and maybe not even there.

But Terry Adams, the Knoxville lawyer who was quietly recruited as a comer by surviving members of the seriously mauled Tennessee Democratic Establishment a year or so ago has proved to be just that in his grueling, under-funded Senate race.

And Gordon Ball, also a Knoxville lawyer, has quickened the hopes of state Democrats, as well —conjuring up a vision of a self-funder who, while still unmistakably a Democrat, can appeal to the state’s centrists.

Both have been virtually omni-present in Memphis, which they see as are a key to victory in the Democratic primary. Both are likable in close-up situations and have demonstrated an ability to connect with ordinary Tennesseans on the stump. Either would make a respectable Democratic candidate, and, depending on what happens in the Republican primary, either might have a chance of pulling off an upset.

One of these two will be eliminated when the votes are counted Thursday, and, despite some grumbling among their respective partisans, either should be able to unify the state’s Democrats against (a) a wounded Lamar Alexander, roughed up in his primary by yet another Tea Party challenge to a GOP incumbent; or (b) the godsend of Joe Carr, should that back-bench thumper actually turn out to have the winning lottery ticket.

(If Lamar should coast to victory, as he always has in the past, that’s another matter)

But here was Terry Adams, speaking to the Germantown Democratic Club week before last, and wondering out loud if Tennesseans were offered a choice between Lamar Alexander, “a servant of Wall Street,” or “Terry Adams, who will be a fierce advocate for Tennessee’s Main Street.” He asked his listeners, “If we give Tennessee that choice, who do you think they will choose?”

He got the expected answer, in a chorus, and continued: “Ladies and gentlemen, this is serious business. It’s one thing to get elected. It’s a whole different thing to govern. We’ve got to get started. This country’s $17 trillion in debt. The rich are getting richer, the poor are getting poorer, and the middle class is disappearing. Ladies and gentlemen, our democracy is being hacked! It’s been hijacked! It’s been held back by millionaires, by corporations, and by special interests….”

All this in a gathering rhythm, a rising momentum, but In a soft, reasonable voice that sounds urgent rather than bombastic. The man can speak. And in his insistence that Democrats don’t have to tone down their message or try to accommodate some vague center, he is a veritable populist and a throwback of sorts to the days when the party’s orators used to fill up town squares with calls for remedial action to benefit the common man.

He is a veteran, able to connect to traditionalists with a message that the men and women who have served in uniform are victims of “catastrophic” neglect. And he believes that Democrats can still win in a red state that is getting redder. “I’m telling you, ladies and gentlemen, this is what we have to do. We Democrats have to work together. We have to get out and vote. 1.1 million people voted for the president in 2008. If the same 1.1 million people get out and vote in this election, we’ll beat Lamar Alexander by 200,000 votes, and we don't have to compromise our principles!” 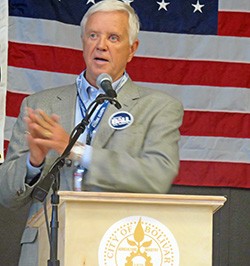 Gordon Ball, too, has the common touch. Lean and white-haired, he has a vague resemblance to Jimmy Carter and the same air of folksiness that elevated that unknown Georgian to national prominence.

After first proclaiming to an audience at Bolivar, “I’m Gordon Ball, and I’m going to be your next United States Senator,” he wastes no time in relating what his audience may heard about the hugeness of his success as a lawyer to the details of his upbringing: “I grew up in a one-bedroom house trailer in Cocke County, Tennessee. My dad was a moonshiner, and at the time I was born he was a house guest of the federal government.

“Since '75, when I graduated from law school in Memphis, I’ve been trying to solve people’s problems, and I’ve lived my life and my legal career by one thing an old farmer said to me ne time. We were doing a film, and he looked right in the camera, and he said, ‘Where do the little people go for justice? Well, that’s what my life has been about.”

Like Adams, Ball is able to represent himself as a throwback to historic Democratic values, and can do so visually, having thrown some $400,000 of his own money into a series of television ads. If Terry Adams can bash corporations verbally, Ball can boast of having taken it to them in a series of class-action suits.

He can sit down with a table-full of labor representative, as he did recently in Memphis, and talk about strategies for raising the minimum wage. For environmentalists, he has the tale of how, “over and over,” he sued the paper companies that had dumped waste into the Pigeon River of his native East Tennessee and forced them to pay for cleanup.

Both Adams and Ball are in sync with contemporary Democrats on issues like women’s rights and support for gays. Both are for raising the minimum wage and for expansion of Medicaid and protection of Medicare and Social Security from privatization schemes.

They differ on two issues that Adams has tried to underscore — Ball’s support for the construction of the Keystone pipeline and his proposal for a flat tax that Ball says would simplify and streamline the tax code and that Adams says would raise taxes for working people and the middle class and lower them for “millionaires like himself.”

Adams expresses concern also about Ball's former support of Republicans like Alexander and Governor Bill Haslam (both of which actions Ball has since renounced and apologized for). He says that their differences on the score of tax policy are so great that he’s not sure he could support Ball if he latter should become the nominee. Ball says only that he intends to “support the Democratic nominee.”

But there seems little doubt that most Tennessee Democrats who dream of reclaiming their party from its fallen state would have little difficulty coalescing behind the winner of a Democratic primary that has showcased both men as viable campaigners, willing and able to make an aggressive race in the fall.