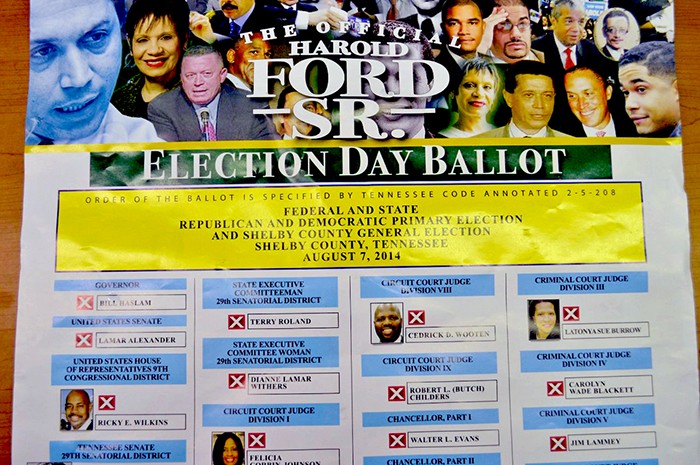 As rain clouds threatened to dampen what was already an unevenly distributed turnout on August 7, election day — one tilted toward the suburbs and the county’s Republican constituency — two new bogus-ballot controversies threatened to further divide the already roiled corps of local Democrats.

One issue was what purported to be a sample ballot with candidate recommendations from Harold Ford Sr., the former congressman and long-time political broker whose issuance of election-day sample ballots during his political heyday "Ford ballots," they were called) influenced the results of many an election.

This poster-sized ballot was emblazoned with the name and portrait of Ford Sr. and was reportedly issued by son Isaac Ford and perhaps other members of the extended Ford political clan, including Justin Ford, a nephew of the former congressman and a member of the Shelby County Commission.

But this new version of a "Ford ballot" was apparently wholly unauthorized by Harold Ford Sr. himself, whose attorney, David Cocke, was in court on Tuesday trying desperately to halt distribution of the ballot through an injunction. (Results of that legal effort unknown as of this posting.)

Among the beneficiaries of the apparently counterfeit ballot was 9th District congressional candidate Ricky Wilkins, who is attempting to upset incumbent Steve Cohen in the Democratic primary. But the ballot also confers its endorsement on leading Republicans like Governor Bill Haslam and U.S. Senator Lamar Alexander.

Another ballot controversy erupting on election dayinvolved the distribution of some 25,000 copies of the official newspaper of the Shelby County Democratic Party by the paper’s editor, Lexie Carter. The paper contained what was represented as the party’s official endorsement ballot, but several of the endorsements made and confirmed through numerous meeting of the SCDP’s executive committee had been changed, replaced with the names of candidates favored by Carter

Examples of candidates on the official endorsement list who were replaced by Carter on what she put forth as that list were Probate Judge candidate Danny Kail, replaced by incumbent Judge Karen Webster, and Criminal Court Judge Lee Coffee, replaced by candidate Kenya Brooks.

When news of the substitutions were publicized in a Facebook post, a lengthy thread developed, with hostile back-and-forths between Carter and numerous local Democrats who accused her of willfullymisrepresenting the party’s will and perpetrating damage on candidates endorsed by the SCDP.

Carter insisted that she was the legal owner of the newspaper and was within her rights to make the changes.

Asked what the party's options were regarding the changed ballot, party chairman Bryan Carson said he had no immediate answer but that the issue was serious and would be taken up after the election.

For obvious reasons, that response is unlikely to satisfy anyone whose election prospects end up being damaged by the unauthorized changes.

More as this story develops. 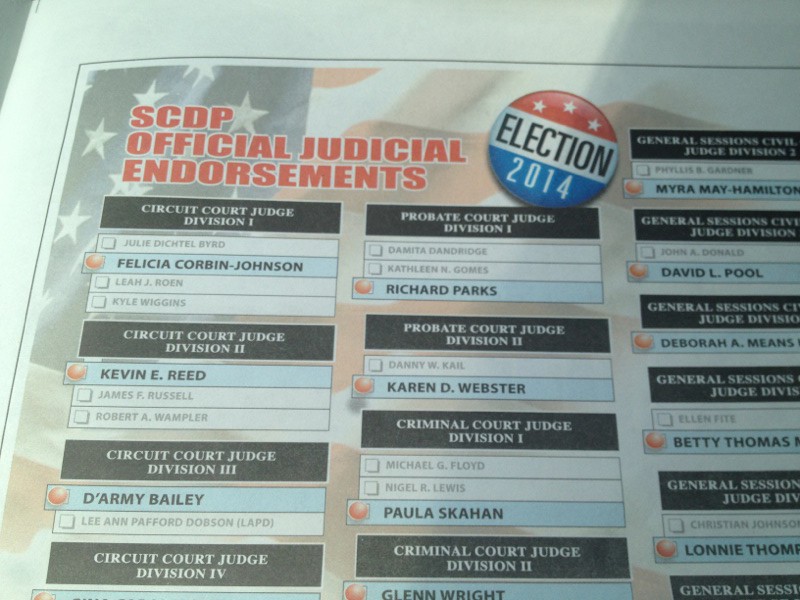