UPDATE: Correct date of nomination meeting is Thursday,August 28, at 6 pm. at IBEW Hall

Although former state Senator Beverly Marrero has gotten off to a good start in a quest to fill the Senate seat which Chancellor-elect Jim Kyle will be vacating, she is about 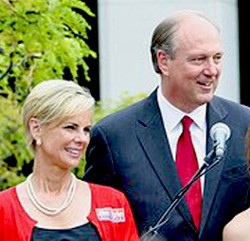 t to acquire a potent rival.

The Flyer has confirmed that Sara Kyle, former member of the Tennessee Regulatory Authority and the current District 30 senator’s wife, will also seek the, Democratic nomination for the soon-to-be vacancy.

That nomination will be made by members of the Shelby County Democratic executive committee, apparently at the committee’s next regularly scheduled meeting of September 4 (See UPDATE above for correct date.) The nomination process will be according to statute 2-14-202 © 3 of the Tennessee code, which reads as follows:

“If a vacancy as described in subdivision (d) (1) occurs after the sixth Thursday before the primary election, the members of the county executive committees who represent the precincts composing such senate district may nominate a candidate to appear on the November election ballot by any method authorized under the rules of the party.”

That formula will require some sorting out, since the membership of the Shelby County committee is determined by state House District, not state Senate District, but in the essence members representing House districts, any part of which are contained in or overlap with Senate District 30 will be eligible to vote.

In any case, this method — cumbersome or not — is “…unless instructed otherwise by State Coordinator of Elections …how we have been advised to proceed,” according to an email dispatched by Norma Lester, Democratic member of the Shelby County Election Commission.

In other words, no appointment, interim or otherwise, by the Shelby County Commision, and no special primary followed by a special general election. Another condition of the election process would reportedly require that any member of the state House now appearing on the November general election ballot would have to remove his or her name to become eligible for the Senate seat.

That provision would seem to give pause to two members of the state House from Shelby County who are known to be considering a try for the Senate seat. They are G.A. Hardaway, state representative for District 93, and Antonio “Two-Shay” Parkinson in District 98.

Parkinson is currently unopposed on the November ballot, but Hardaway has a Republican opponent, Colonel G. Billingsley, who in the event of Hardaway’s removal from the ballot, would win the seat by default unless Democrats organized a massive write-in campaign.

In any case, Sara Kyle has let friends know she’s in the race and won’t be persuaded out by the fact that Marrero has begun to pick up endorsements, including one from Deidre Malone, recently the Democratic standard-bearer for County Mayor.

Marrero is also sure of all-out support from 9th District congressman Steve Cohen, her longtime friend and political ally. A Marrero-Sara Kyle contest would, in effect, be a continuation by proxy of a blood feud that has existed for years between Jim Kyle and Cohen, who served uncomfortably in the state Senate together for years as fellow Democratic caucus members but whose relationship was always frosty and characterized by a sense of rivalry.

After then state Rep. Carol Chumney won a City Council seat in 2003, Cohen backed Marrero to oppose Jeff Sullivan, a Kyle aide, in the resultant pecial election to replace her.. That contest, which resulted in a Marrero victory, was no-holds-barred and included a Cohen call to prosecute Sullivan for early-voting for himself in a precinct where he did not reside.

After the Republican-sponsored redistricting of 2011, Jim Kyle and Marrero found themselves in the same district as election opponents, rekindling the feud. Kyle won that one.