In which Shelby County's Democrats bust a move in peace and togetherness and prepare for the next race. 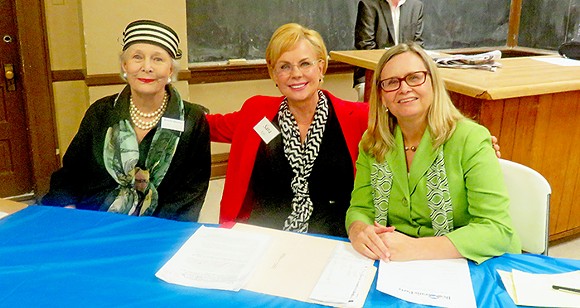 Lo and behold, a meeting of the Shelby County Democratic executive committee was held this week and conducted in perfect amity, and the results, while not immediately gratifying to everybody, were reasonably sure to be embraced ultimately by the committee and by the entire party membership

The occasion was the filling of a vacancy in state Senate District 30, created last month when the longtime seat holder, Jim Kyle, was elected Chancellor on August 7 and formally resigned on the 29th. Three candidates, all women, vied for the honor of the nomination, which, as state Attorney General Robert Cooper had ruled, had to be filled by a given political party’s governing committee.

In Shelby County, the relevant organizations were the Democrats’ executive committee and the Shelby County Republicans’ steering committee. Though District 30, which encompasses much of North Memphis, Frayser, and Raleigh, is heavily Democratic, it was the GOP which filled its place on the ballot first, having nominated physician’/broadcast executive George Flinn as its nominee at a steering committee meeting last week.

Sensing all but certain victory in November, several Democrats considered throwing their hats in the ring, but in the end it was three of the party’s prominent women who vied for the nomination. They were Sara Kyle, wife of the former senator, and a former city judge and member of the state Regulatory Authority in her own right; Beverly Marrerro, a former state senator who had lost a 2012 race to Jim Kyle in District 30, which had been newly gerrymandered by the Republican legislative majority in Nashville; and Carol Chumney, a former state representative, City Council member, and mayoral candidate.

All three struck a note of harmony, as did the three candidates, each of whom made a brief speech before the vote was taken. The only surprise came when Chumney announced that she was withdrawing and throwing her support to Marrero.

Kyle would prevail by margin of 18 to 16, with only those committee members voting who representing districts encompassed by or within District 30. There were allegations of last-minute vote-switching from some Marrero backers, and there was an element of payback from some of the committee members who have historically not been friendly to 9th District congressman Steve Cohen, a close ally of Marrero.

But, as some vintage bard of the language once said, this, too, will pass. Sara Kyle — sunny, energetic, and experienced in state politics and in Tennessee Democratic history — is the sort that all party factions will have no difficulty closing ranks around.

And even though she will join a Democratic Senate corps that will have melted down to five by the start of the next legislative session, Kyle, along with new senators Harris and Jeff Yarbro of Nashville form a core that the party has a chance of rebuilding around.

Ultimately, as one committee member said after Monday night’s vote said afterward, the Democratic Party had already scored a victory of sorts over the opposition. For all the well-known schisms within local Democratic ranks, Monday night’s meeting had less contentiousness, at least on the surface, than the GOP equivalent of the preceding week.

Flinn had been troubled by one persistent heckler, Colonel Gene Billingsley, who was already a GOP candidate for a state House seat in District 93 and, oddly, had wanted his party’s nomination for the Senate vacancy, too — to the point of being both vocal about it and hostile to Flinn. That was one more hiccup than had plagued the Democrats’ nomination meeting.