After a good deal of superficial wrangling, agreement on the administration plan comes as something of an anti-climax.

For a fortnight (a term used by the Brits and, once upon a time, by Henry Luce’s Time Magazine), a legitimate issue of governance predominated among the members of the Shelby County Commission, who have otherwise been preoccupied with internal political intrigues.

The issue was that of health-care benefits for county employees — a reprise of sorts of a dilemma that had been previously faced by such governmental entities as the City of Memphis, Shelby County Schools, and the City of Bartlett.

The elimination of spousal coverage would save the county $3.8 million, according to data presented to the Commission by mayoral aide Kim Hackney, who bore the brunt of testimony about the new plan. Another $7.2 million would be saved by various plan-adjustments, and $2.8 million by raising premiums — for a total of $11 million needed, said Hackney, to make up for shortfalls and additional costs relating to the Affordable Care Act.

As former S.C.S. board member and current Commissioner David Reaves would note during debate, the schoolteachers of the county system had already had to bite this bullet on spousal elimination, and it was only fair that other county employees should have to, as well.

Resistance to the Luttrell plan’s formulations was spearheaded by unlikely allies Terry Roland, a Millington Republican whose conservatism has been tempered by a desire to champion public employees’ concerns (especially those of first responders), and Walter Bailey, a venerable Democrat who commands the loyalty of his party mates on the Commission, especially that of several newcomers to the body.

In last week’s discussion of the plan in committee and at this past Monday’s debate in the Commission’s general session, Roland complained, with apparent justice, that relevant details in justification of the proposed health-care changes had not been presented to the Commission before the relatively sudden roll-out of the plan, and he and Bailey insisted that alternatives had to be explored.

The two of them, abetted here and there by other Democratic members, made enough headway — despite assertions by GOP member Mark Billingsley and others that the administration’s numbers were likely to withstand serious challenge — to force a postponement of action by the Commission. It was agreed some more behind-the scenes consideration would continue until special back-to-back committee and general sessions that were hurriedly scheduled for Thursday could be held.

At the Thursday committee session, held in the Commission’s new 6th-floor meeting room, Roland repeated his laments that the welfare of employees’ families was under threat, Bailey, as before, insisted there had to be alternatives. His remarks bore a hint of the final outcome, though, as he wondered aloud why none of the several unions whose representatives had testified against the plan had been ahead of the curve and developed alternative health-insurance scenarios of their own.

Meanwhile, Hackney outlined a couple of alternatives to the basic mayoral plan that would eliminate the proposed spouse-out. Both of these, it became obvious, would jack up employee premiums too high or reduce the level of coverage or otherwise dilute the effectiveness of a county health-insurance system that, as Danny Young of the Firefighters Union had acknowledged during testimony, had been a “very good” plan.

So it was that, after two hours of superficial wrangling in the committee room, the follow-up general session held downstairs in the auditorium of the Vasco Smith County Administrative Building became a pro forma affair. What had been a persistent stumbling point regarding insufficient communications between the administration, the commission, and county employees was resolved in a suggestion by administration CAO Harvey Kennedy that a replacement would be found for erstwhile liaison official/negotiator Danny Kail, who had ascended to another administrative position elsewhere in county government.

Within a half-hour, th 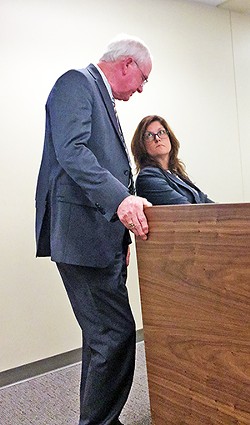 e original Luttrell plan — spousal carve-out and all — was approved by a 9-3 vote. Republican Steve Basar was absent in New Orleans, getting married, and the only nay votes came from the GOP’s Roland and Democrats Bailey and chairman Justin Ford. (Credible sources indicated Ford’s vote was window dressing, that he had promised the administration a yes vote if circumstances necessitated it.)

The resolution cleared the way for the employees’ open enrollment period to proceed as scheduled from Monday, November 3, to Friday, November 21.

Left unresolved was the basic question of why the administration had been unable to provide an explicit earlier warning of what was to come to the commission and to employees’ groups. As Young and other union officials would testify during debate, as recently as the spring employees’ representatives were told that few revisions, if any, would be called for.

That basic question had been implicit in much of the discussions that had gone on but was never actually posed or answered in point-blank fashion. Acknowledging as much, Democratic Commissioner Van Turner said that various factors over the past several months had intervened — notably including the county general election, the winding down of a former, contentious Commission preoccupied with other matters, and the post-election ushering in of a changed Commission with six brand-new members.

And now, with its first major governmental issue resolved and out of the way, that new Commission is free to revert to the county governing body’s traditional pastime, the waging of an internal power struggle. The next phase of that will be a November 6 hearing in the courtroom of Chancery Judge Walter Evans regarding a suit brought by a Commission majority against Chairman Ford’s allegedly arbitrary rejection of agenda items.