Former First Lady and Secretary of State among many luminaries on hand as new Center for Global Education and Collaboration is unveiled. 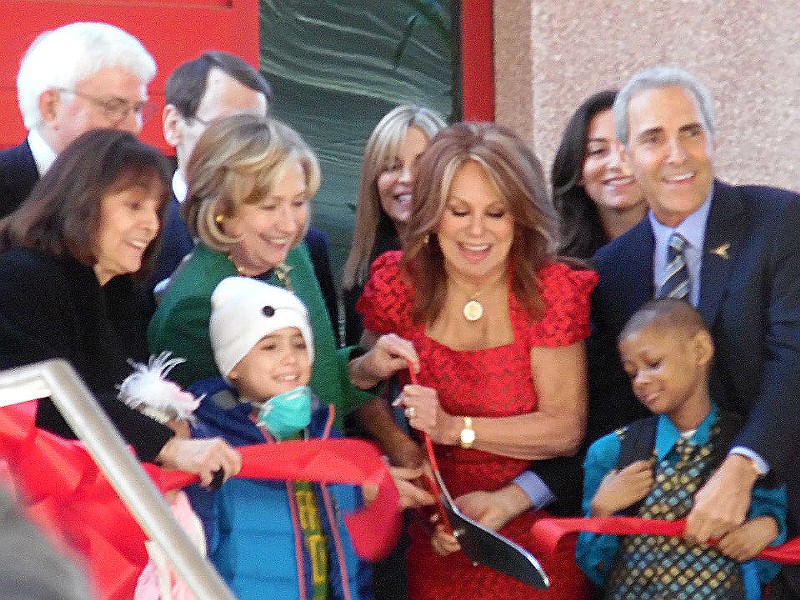 For the second time in a scant few months, Memphis and St. Jude Children’s Research Hospital have been honored by the presence here of an exceptional woman. Actually, make that the third time.

There’s no disputing that First Lady Michelle Obama’s visit to the facility in September was important and of great value to the patients, the medical personnel, the support staff of St. Jude, and all of the renowned hospital's well-wishers.
As was the case on Thursday, when former First Lady and U.S. Senator and recently retired Secretary of State Hillary Clinton, widely acknowledged to be a presidential prospect for 2016, paid a visit.

But count it a third time for yet another distinguished visitor on Thursday — Marlo Thomas, daughter of St. Jude founder Danny Thomas and his successor at the helm of St. Jude's international efforts upon her father's death in 1991. And that third time, as they say, would be the charm.

Secretary Clinton was on hand to participate in the dedication of the new Marlo Thomas Center of Global Education and Collaboration, a centerpiece of the recently announced expansion of St. Jude's affiliate relations, both nationally and internationally.

Clinton, who would assist Thomas in the ceremonial ribbon-cutting before a large audience studded with community and regional leaders, made some pertinent and well-heeded opening remarks in tribute to Thomas and to St. Jude, a place where, as Clinton put it, "children are always free, free to heal and free to hope."

The former Secretary marveled at St. Jude's new proton therapy center, with its equipment that can more precisely aim radiation at a patient's tumor while sparing the adjacent healthy tissue.

"One child saved in Memphis could mean ten saved in Mexico or 50 in Malawi," said Clinton, touting the hospital's "open door policy" in treating children of all places, races, and economic circumstances.

And she surely was echoing her own efforts on behalf of her husband's attempts at health-care form in the early '90s when she said, "This is what health care should look like, patients before profits, collaboration before competition, and that is particularly the kind of health care that every single child deserves.

"And you understand that as well as our friend Marlo," said Clinton, who announced that Thomas would be named by President Obama on Monday as one of the recipients of this year's Presidential Medal of Honor awards.
It was Marlo Thomas' emotional speech in response to the dedication of the new building in her name that unquestionably highlighted the event.

There are many people who remember Thomas the stat of That Girl, a '60s TV sitcom, and there are many more who are used to seeing her over the years in her various televised promotional efforts for St. Jude.

But the Marlo Thomas who revealed her inmost feelings on Thursday was a revelation — not the wise-cracking, happy-go-lucky acteess of yore nor the practiced pitch-person of the fund-raising spots, but an open-hearted, humble servant of the cause for which St. Jude exists — as Thomas put it, simply, the "treating and defeating of childhood cancer."

Thomas was near tears several times as she spoke, as were many in her audience.

As, for example, when she said, "I held a dying chlld in my arms…I never thought I could bear such a thing. I’m a different person than I was when my father died, and I could see through his eyes."

As, for example, when Thomas suggested that, "if anyone deserves her name on a building," it was a 7-year-old patient named Katie who, while being treated for an aggressive form of cancer, spent the final months of her life assisting in St. Jude's fund-raising efforts.

"In her name, and in the name of countless other children, I accept this honor with great humility, and I vow to you that I will keep these eyes on our mission." said Thomas, who closed her remarks by repeating a frequent statement of her late father: "No child should die in the dawn of life."