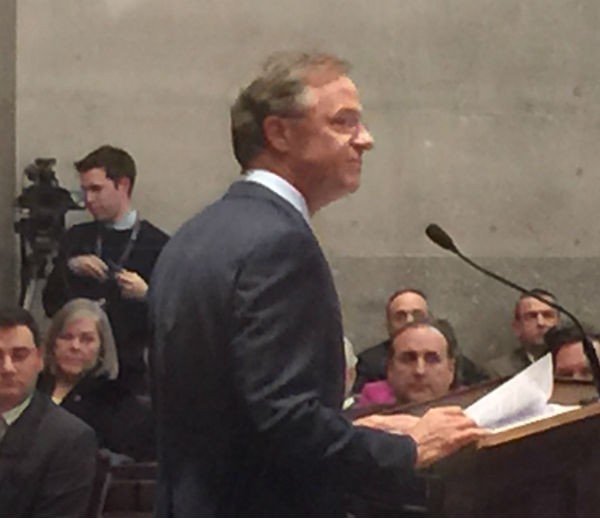 NASHVILLE -- The special session of the Tennessee General Assembly devoted to Governor Bill Haslam’s “Insure
Tennessee” plan has begun, and — Haslam being Haslam, a man of soft persuasion rather than fustian and bombast — the state’s chief executive artfully pitched an appeal that was simultaneously above partisan politics and designed to address what have been the main sticking points among GOP legislators.

The Governor dutifully paid lip service to Republican talking points, loosing his own shots at what he consistently called “Obamacare” but taking pains to distinguish his own plan from the superstructure of the Affordable Care Act.

Haslam gave an explanation for why in 2013 he had rejected the opportunity to expand Medicaid (TennCare in Tennessee) — an expansion that would have allowed the state to avail itself of something like $1.5 billion annually, money which the state’s hospitals, charged with caring for indigent patients, contended they desperately needed.

He hadn’t accepted expansion then, the Governor said, because “expanding a broken program doesn’t make sense.” He went on: “But I also didn’t think that flat out saying no to accepting federal dollars that Tennesseans are paying for, that are going to other states, and that could cover more Tennesseans who truly need our help, I didn’t think that made much sense either.”

Accordingly , he said, he decided to provide his own example of how a governmental health-care plan should work, spending the time since that decision in 2013 to devise what he told the assembled legislators is a two-year pilot program that has incorporated free-market principles, both through an optional voucher component for use with private insurance plans and through requiring co-pays and modest premiums — “skin in the game” — of those new insurees who chose to go through TennCare.

Haslam pointed out that “Insure Tennessee” would add no new costs to the state budget, since the Tennessee Hospital Association had guaranteed to pay whatever additional costs would be incurred once the federal government, after two years. dropped its own subsidy from 100 percent to 90 percent.

If either the federal government or the Hospital Association proved unable to follow through as promised, or if the state in two years’ time merely decided “Insure Tennessee” wasn’t a good fit, the state had been assured by court decisions and the state Attorney General’s advice that it could discontinue the plan.


(Pointedly, the Governor, in giving the address, dropped this line from his prepared remarks: “I understand the concern, but I think it’s worthy of mention that the United States of America has never missed a scheduled Medicaid payment.”)

As for the professed concern of “Insure Tennessee” skeptics regarding the pain of having to discontinue coverage for new insurees after two years, Haslam said, “If you gave your loved one an option - you can have health coverage now to address your very real need and with that the possibility that you might lose it in the future, or you could never have it - which would you choose? If you think about your loved one, I bet the answer is simple.”

Ultimately, said Haslam, the state simply had an obligation to the unfortunate and the indigent, one based in commonly held spiritual precepts. “My faith doesn’t allow me to walk on the other side of the road and ignore a need that can be met - particularly in this case, when the need is Tennesseans who have life-threatening situations without access to health care.”